Remember the 1987 cyberpunk action movie, Robocop directed by Paul Verhoeven? Set in a crime ridden Detroit, Michigan, Robocop revolves around a police officer Alex Murphy who is killed by some criminals and is subsequently revived by the megacorporation Omni Consumer Products as a superhuman cyborg law enforcer called Robocop.

Bizarre as it may sound, something of this sort is actually happening. Yes, the first functional robotic policeman stands near the Burj Khalifa, the world’s largest tower in Downtown Dubai. After using Lamborghinis and Ferraris to patrol the streets, the police force in Dubai has deployed a robotic officer, the first in a unit which aims to comprise a quarter of the force by 2030. With the potential of identifying miscreants as well as collect evidence, it is set to patrol the crowded areas of the city. It is a part of the government initiative which aims to replace some human crime fighters with machines.

This life size robot is clad in the colors of the Dubai Police Uniform and can do a military salute, shake hands, read vehicle license plates, is properly equipped with cameras and facial recognition software. It would also help police watch for risks like unattended bags in busy areas of Dubai.  According to the Dubai police, if the experiment goes right, it would want these unarmed robots to make up 25% of its patrolling force in another ten years. 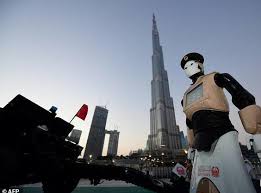 According to Brigadier Khalid Nasser Al Razooqi, the director general of the Smart Services Department at Dubai Police, “ these kinds of robots can work 24/7. They won’t ask you for leave, sick leave or maternity leave. It can work around the clock” unless there is some malfunctioning of the circuits. People can report crimes or inquire about speeding tickets using the touch screen computer which lies embedded in its chest. It wears a police cap and moves around on wheels and has the ability to compare faces with a police database and flag matches to the headquarters.

People are becoming comfortable communicating with the robots and as Razooqi stated, “ most people are not nervous about talking to a robot and some even seem to prefer it.” Talking about today’s generation he said, “ we now see the new generations who are using smart devices- they love to use these kinds of tools. A lot of them have seen the Robocop movie and they said: you guys, you have done it.” 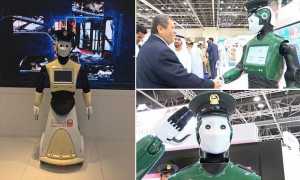 The robot is to be deployed primarily at the busy tourist spots and is well equipped with a camera which transmits live images to the operations room and it can also look for and identify suspects wanted by the police. All these are efforts, as Razooqi says, to find new techniques of dealing with people. He, however, acknowledged the fact that, competent as the robots maybe, they cannot replace humans on tasks like making arrests. The robot has been built by Barcelona- based PAL Robotics, programmed by the Dubai police to suit their specific purposes and the exact cost has not been disclosed.