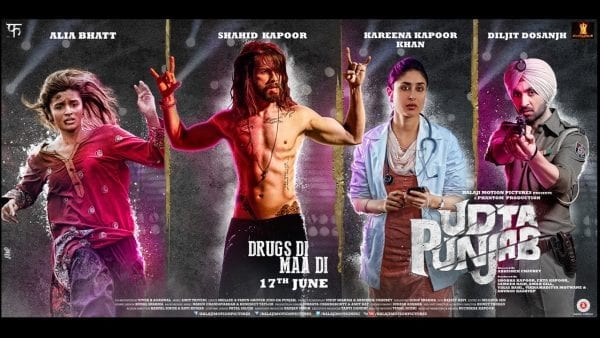 Apparently Tanmay Bhatt’s controversy was not enough that we now we have the censor board going out of sense and banning Udta Punjab starring Shahid Kapoor, Alia Bhatt, Kareena Kapoor and Diljit Dosanj. The movie directed by Abhishek Chaudhary and co produced by Anurag Kashyap, revolves around drug abuse.

Going by the trailer, we can pretty much make out the movie has a strong message to give out. But our dear censor board has, as said earlier, lost its senses and has cut 89 scenes from the movie. So basically cutting off almost the essence of the movie. Not only this, now they have a problem with the name itself. Apparently they want Punjab to be removed from the name too and all references regarding the state and political parties and elections.

The audience who has been eagerly waiting for the movie’s release and top producers themselves stand with Anurag Kashyap and demand Freedom of Speech. Yes. Freedom of Speech which is just a right written in our constitution.

“I demand on behalf of the entire industry… that the ministry should remove Pahlaj Nihalani,” said Mukesh Bhatt, head of the Film and Television Producers Guild of India, alleging a “complete conspiracy to sabotage.

Kashyap took it up on Twitter Tuesday. “I always wondered what it felt like to live in North Korea .. Ab to plane pakadney ki bhi zaroorat nahin…” read one tweet, while another clarified, “It’s my fight Vs a dictatorial man sitting there operating like an oligarch in his constituency of censor board, that’s my North Korea.”

Pahlaj Nihlani on the other hand calls Kashyap a kid who is being denied a toy.

But is it Kashyap being denied a toy or Nihlani acting too conservative?

Anurag Kashyap is all lashing out and called Nihlani a dictator. Nihlani, on the other hand, blames Kashyap of taking money from AAP for the movie. Seeing politics get in between, Arvind Kejriwal has cleared the air and said AAP has strongly supported Team Udta and support its release.

Surprisingly both Congress and AAP have placed the issue of Drugs abuse in Punjab the center of their campaigns against the Akali Dal-BJP state government in the run-up to assembly elections early next year. And even then the movie is being banned.

While the big producers took to twitter, fans flooded facebook with Udta Punjab memes. Check out some of them:

As always, AIB rocks it .

This one is by TOI.

The movie is all about REALITY. Shahid Kapoor says in an interview that the movie is not promoting drugs but is showing the condition of the people addicted to it and acts as a warning to the ones who may be thinking to get into it. So basically this movie is portraying the reality and acting as a moral lesson too.

But our dear censor board has a problem with this and instead of banning movies like Hate Story 1,2, 3, Grand Masti, Ragini MMS etc, it is trying to kill off eye opening movies like Aligarh and Udta Punjab. This is rather ironic. Udta Punjab is being banned for telling a tale of reality, songs which promote alcohols are freely promoted like Chaska ae yaara nu, daru vi chadi rakhn da…and enna vi na dope shope maareya karo  or Honey Singh’s chaar botal vodka etc. These songs aren’t prayer songs censor board!

Someone really needs to get the difference between reality and defaming and that is definitely the censor board. All in all we hope Anurag Kahsyap wins the case at the Mumbai high court and the movie releases on 17 of June with no cut scenes. High time that censor board gets some sense.

Gargi Chatterjee - March 31, 2020 0
Wondering if you should learn HTML to further your career prospects?As a generation is almost entirely dependent on the internet and social media, it...