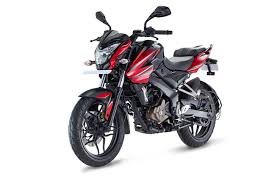 Bajaj had recently discontinued the Pulsar 200NS (Carburettor version) series from its showcase. Here are some reasons why people still love it!

As the NS was the flagship model from Bajaj, it contained all Bajaj had to offer at that time. With the patented triple spark technology if offered a fuel efficiency of 40 kmpl that was a big deal for a 200cc bike in that category.

From the history of the Pulsar series, the demon black version is the most sold and Bajaj has a black version in every variant of the series.But when the NS was introduced in 2011, a new tone, the Mustard Yellow entered, complementing to the styling the new tone was a huge hit.

Later when Bajaj introduced the Dual-tone variants the Yellow was ditched and two models with body (not so catchy) graphics were introduced. Another ‘fail‘ move from the company. This too affected the sales of the brand.

Bajaj for the festival season had shut down the production of NS (August 2015) to concentrate on the semi-faired version of NS called the 200 AS & 150 AS from the Bajaj Chakan Plant. A major rip-off from the NS. Bajaj ended up making haters for ripping off the NS.

Bajaj had introduced the Pulsar 200NS, not only to the domestic market but for foreign market as well. This led to the formation of riding groups such as The Lycans & Naked Wolves, who conduct adventure rides for the NS enthusiasts.

In recent news, Bajaj has released a statement regarding the release of the FI (Fuel Injection) version of the NS by early 2016, along with updated looks and body graphics, the new NS will share the refined engine of the new RS200. The FI version was introduced early in the Indonesian market and through this, update the total bhp of the bike rises from 23 to 24.
What is your opinion on this story? Tells us in the comments!