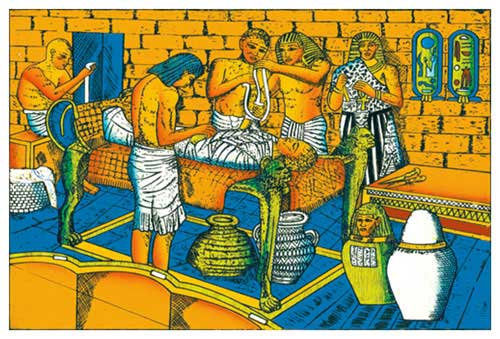 The Pyramid of Khufu at Giza is the largest Egyptian pyramid. It is the only one of The Seven Wonders of The Ancient World which still exists. It measures 479 feet in height and 751 feet, one corner to another. About 2,300,000 blocks of stone, each weighing up to 30 tons were used to build this pyramid. It is amazing how skilled these ancient Egyptians were. But why did they go to so much trouble to erect such pyramids?

Ancient Egyptians were religious people. They believed in life after death. Preservation of the dead body was extremely important to them as they believed that the soul would start a new life after death and that it would need it’s body and it’s belongings from the previous life. Hence, the Egyptians spent a lot of time and money to prepare for their afterlife. While the rich were buried in tombs with their belongings, the poor were buried in the sand.

The Kings of the 1st and 2nd dynasties were buried in monuments known as ‘mastaba,’ which means ‘bench.’ Sun-dried mud bricks were used to make these buildings, and they were partially buried, their tops protruding above the ground. The bodies could not be preserved back then, as they came to know of the embalming process much later.

Imhotep, one of the top officials of Pharaoh Djoser was the first one who had the idea of stacking one mastaba over another, to form some steps that decreased in size as it reached it’s apex. This gave birth to the Step Pyramid of Djoser. The steps were supposed to serve as a stairway for the soul of the Pharaoh to reach heaven. Great Pyramids were built for several dynasties till the power of the central authority decreased. The Pyramids built after that were small and constructed in haste.

How were the bodies preserved? By the 18th Dynasty, the Egyptians had figured out how to preserve their bodies. The process came to be known as mummification. Herodotus, who visited Egypt in the 5th Century BC, had written about the whole process in his book – The Histories.

“As much as possible of the brain is extracted through the nostrils with an iron hook, and what the hook cannot reach is rinsed out with drugs. Next, the flank is laid open with a flint knife and the whole contents of the abdomen removed. The cavity is then thoroughly cleansed and washed out, first with palm wine and again with an infusion of pounded spices. After that it is filled with pure bruised myrrh, cassia, and every other aromatic substance with the exception of frankincense, and sewn up again, after which the body is placed in natron, covered over entirely for 70 days—never longer. When this period, which must not be exceeded, is over, the body is washed and then wrapped from head to foot in linen cut into strips and smeared with gum, which is commonly used by the Egyptians instead of glue.”

The Egyptians hence used Natron– a salty mineral found in the Nature Valley, north of Cairo. This mineral absorbed the fluids in the body and dried it. They did not remove the heart from the body as they believed that the heart is the ‘center of intelligence and emotion.’

Anubis was considered to be the God of mummification.  Preparing the body of the dead to be received by Osiris was his responsibility.

Eastern Orthodox Traditions And The Reasons Behind Them