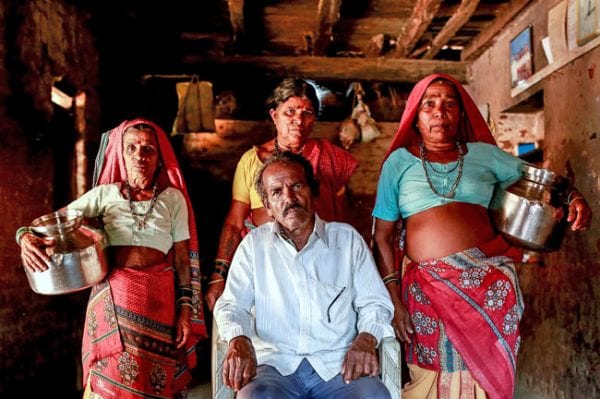 The word- Water Wife might remind you some fairy tale story by Walt Disney with the prince and princess. In the rural area of the village of Denganmal, in western India meaning of this word is far from the fairy tale. As a consequence of the lack of water, men in this village are used to close the polygamy marriages in order to have carriers of water.

Denganmal is the village where the taps are missing. To have enough drinking water, a wife must everyday walk to far-away well to fetch the water for the household. Some men marry more times since the first wife gets older and does not have forces anymore to bring the water from so far source.

The climatic conditions of the village are difficult to overlook. It is quite isolated place in a hilly area, far from other villages. The summer months are severe and sometimes cause that the well runs dry and the domestic animals are dying of thirst.

The village has only about 500 habitants and the condition for life are scarce. The houses are fragile, made simply from mud and wood. Reporters of CNN visited this village to report the actual situation of the “water wives” and living conditions. They met a man, Sakharam Bhagat, who has one of the largest family there. “Bhagat’s modest house is made of mud, supported by a few wooden beams. But it’s one of the bigger huts in the neighborhood,” CNN reported. 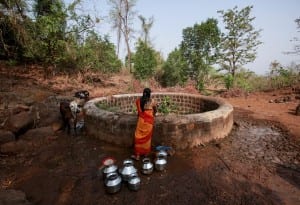 Bhagat has three wives, and the hierarchy of the family is very clearly settled. The society is patriarchal. Therefore, the man will always be the head of the family. The women are mostly as much powerful as much they have been married. This fact very often goes hand in hand with the age. It is an unwritten rule that the man always marries a younger woman than the other wives. The simple reason is that he needs to have a youthful energy to help him maintain the household.

Polygamy exists in the world from the very beginning, however, in the last decades, it is permitted mostly only for the religious reasons. In India, the multiple marriage is forbidden by the law. The Muslims in the country are the only exceptions because it is a part of their religion and it is even the sign of wealth to have more wives. However, in Denganmal, the popular belief is not Islam but Hindu.

“I did what I did only because of water,” he explains to CNN the circumstances of his marriages. His oldest wife discloses that in the dry months of the summer, there was no option to walk to fetch the water from far well or river. The way may take up to 12 hours and with children alone at the home, it was simply impossible. So Bhagat married again and then again. Nowadays, the oldest wife can look after their children while the younger wives are on the way to bring water to the home.

“They get the respect associated with being married women once again. The family eats together, lives together, and we see and hear them laugh together,” CNN writes about the no competitiveness inside the family. Even it does not have to always so.

ActionAid India has made a short documentary which is available on the Youtube about water wives, and they everyday struggle in the family and with the drought. In the first half,e the oldest woman is talking to the younger wives about the jealousy that she felt in the time of arrival of the younger wife. And assure the younger wife about the normality of her jealousy behavior toward the youngest wife. Her speech finishes with the words: “We are a lot like these. Look how peacefully they look.” And she points to the water containers.