Ripley’s Believe It or Not!– the show that has managed to bring weird, unbelievable facts to you for almost 96 years. It all started when Ripley started depicting them through cartoons in newspapers, and now they have their show along with an impressive website. The team always searches the globe for the ultimate in unusual oddities, strange stories, and terrific real tales. Here is a list of few people, who have managed to not only be the ‘odd’ one in the society but also to make us wonder in disbelief.

A Polish man living in Germany went about his business for about five years without noticing he had been shot in the head, during one New Year’s Eve, as he was drunk when it happened. The doctors found a .22 caliber bullet in the back of his head after the 35-year-old went to have, what he thought was a cyst, removed. He remembered having a sore head, but that he wasn’t a person to go to the doctor after a hangover. The wound later healed around the bullet, and it was not until the man decided to have the lump examined due to recurring pains, that the discovery was made. An X-ray of the bullet in his head is shown below: 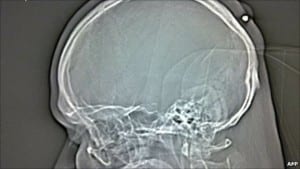 Michel Lotito, a man from Grenoble, can eat anything from bicycles (including the spokes) to an entire Cessna 150 airplane. Between 1959 and 1997, he consumed an estimated nine tons of metal. That’s right, nine tons. He suffered from Pica, which is a medical condition that causes cravings to eat such things as dirt, glass and, apparently, anything metal. The disorder, as you might guess, can lead to a blocked intestine and other complications in healthy people. But he is one hell of a metal man. He proved that by eating a big robot soon after going through a complicated surgery as he was attacked and brutally stabbed, resulting in life-threatening injuries.

Nicknamed Ata, it is a 6-inch (150 mm)-long skeletal remains of a human that was found during 2003 in a deserted Chilean town in the Atacama Desert. It was speculated to be an alien for a long time. However, DNA testing revealed the humanoid to be a human being, of recent origin.

Robert Ripley found a shrunken body in Peru (sometime around the 1930s) and named it “Atta-Boy,” after the nearby Atacama Desert, the same desert where Oscar Muñoz would eventually find the Atacama humanoid. Hardly a coincidence worth ignoring. 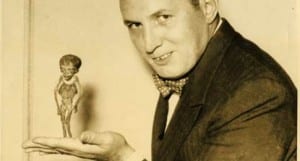 Kelvin Mercado, also know as the Pegman, holds the record for the most number of pegs that can be put on a face at 163. If you want to watch the man in action, check out the video below:

The Man- Ripley, Himself 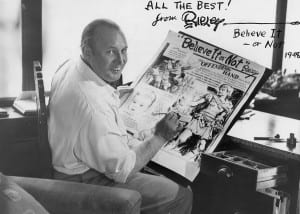 Nicknamed The Modern Marco Polo, he began his endless search for unbelievable stories to draw in his immensely popular newspaper cartoon feature, he acquired hundreds of exotic artifacts from around the world, from 1922. There has been no turning back ever since. In time, Robert Ripley opened seven different “Odditoriums”, typically associated with World Fairs, to house his vast collection.

Robert Ripley received an average of 3,000 letters a day for over 20 years. That’s over a million letters a year!

Ripley was the FIRST to broadcast from:

It was also Robert Ripley, who spurred the interest of the American people to demand “The Star-Spangled Banner” to become the official national anthem, as it became the most patriotic song after The Civil War. His death on May 23, 1949, proved to be a great loss to the world of amazingness.

This is a very creamy layer of the Ripley’s Believe It or Not! List of amazing people, animals, and facts. If you want to know more about these amusing facts, visit the official website at http://www.ripleys.com/ .