Do you want to know about the top 3 ways the Universe will end? Are you curious to know the ultimate fate our Universe will meet?

Our Universe is now around 14 billion years old. For every start, then there must be an end. This applies to The Universe too. An end? What type of period? How will it end? Whether the Universe permanently die? What happens to us if the Universe dies? And so many questions may arise in your mind. Here is your answer to all your questions 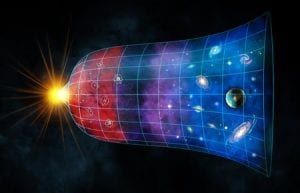 We all know that the Universe’s origin history. A Huge Explosion creates it in space caused the creation of the Universe. This is called the Big Bang theory, and this was first proposed by a Belgian Catholic Priest Georges Lemaitre. The galaxies are created in it and got evolved in its expansion.

The Universe is not still; it is expanding and creating new spaces equally every second. The Big Bang triggered the evolution and expansion of this Universe. As per the recent estimation, the Hubble constant is 72 km per second. 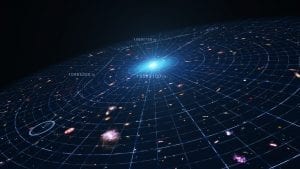 If you ask a cosmologist how big a universe is, they will say it is 93 billion light-years. Why is the expansion of the Universe dangerous? It is the question you might ask. The expansion resulted in the formation of new atoms, and it made many stars and galaxies. The speed of expansion is getting increased day by day.

This can have a severe effect on the galaxies in it. The gravity pull cannot hold the expansion for longer; to some extent, it may fail to grasp and initiates the destruction. The space inside the galaxy also expands, but it has enough gravity to keep them together.

You might ask proof for the expansion of the Universe. Many Scientists worked for years to find these things. Imagine a car is crossing you. The sound of the car is louder when it is nearby you, and the sound decreases as it moves away from you. This is called the Doppler Effect.

In 1912, an astronomer called Vesto Slipher found the wavelength of other galaxies light is increasing, which means they are moving away from our Universe. This is again proved in 1927 by Edwin Hubble, who found the Hubble Constant.

The increase in wavelength of the galaxy’s light is called Redshifting, and the decreasing of wavelength is called Blue shifting is astronomical terms. 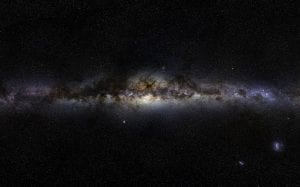 Some scientist calls the force which boosts the expansion of the Universe as Dark Matters.  It is a force which is opposite to the gravity. A force beyond our science. It is invisible and exists everywhere in the space, more than 70% of the Universe. This leads to the Universe’s expansion.

Why are we discussing these things? It is the question you might ask. You have to be clear with these things before getting into the top 3 ways the Universe will end.

Top 3 Ways the Universe Will End 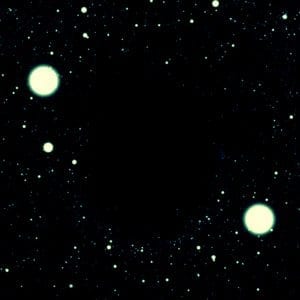 The supernova surveys in the 1990s show the evidence for the significant expansion at an increasing rate. Yes, it is getting faster, and the dark matters infinitely accelerate it.

When the distance between galaxies in this Universe becomes several light-years, then there will be no longer gravity pull between them. They enter the state called “Cosmic Event Horizon. “ 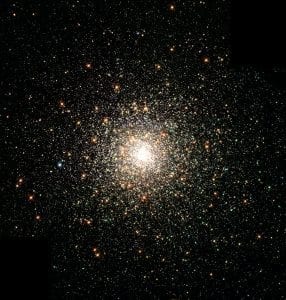 At that stage, the increased dark energy starts to disrupt every galaxy and everything in this Universe. There is no protection for our galaxy because the dark energy weakens the gravity. So, the space inside the galaxy is increased, and gravity cannot hold it anymore.

As a result of weak gravity, there will be no particle close enough to interact with each other anymore so that the protons and neutrons are separated into their component quarks. This happens when the Cosmic Event Horizon is smaller.

These structures like galaxies and large bodies like stars, planets, and black holes will be torn apart because of an increase in space between single objects, which causes a Big Rip.

A big rip universe will have nothing other than isolated particles separated by infinitely expanding space. This will happen 22 billion years from now. Big Rip is the most popular and most probable end of our Universe. This made Big Rip stand first in the list of top 3 ways the Universe will end.

Whether the Universe is dead forever after Big Rip? Maybe, it can cause another big bang to start the expansion of the Universe again, but there are no such promising theories. 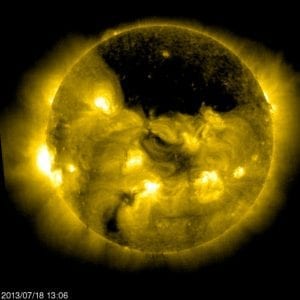 You may think that the heat death will make the Universe die in a fiery inferno. It is not the case. In physics and thermodynamic sense, heat refers more to the entropy a system is. Heat is the random motion of particles.

A familiar example is a sun. It is making the heat by converting hydrogen into helium, photons, and neutrinos, converting mass-energy into heat energy in this nuclear fusion process. When it is at its maximum entropy level, then there will be no more fuel left for the conversion process. As a result, Heat Death occurs.

The speed expansion of the Universe is accelerating at a specific rate. This acceleration can decay and empty the fuel of all-stars in the form of radiation. This makes all the gas clouds that form stars to exhaust.

As a result, stars attain the maximum entropy, and no more reactions take place. When the energy is high, then it tends to move at places with less power. There is enough space in the expanding Universe; thus, it makes the equilibrium.

At this condition, the movement of everything would stop, and the energy would cease to react furthermore. The remaining suns will die, and the Universe will turn dark; also, the black holes start to degenerate slowly and evaporate over a trillion years.

After the heat death, only a dilute gas of photons and light particles remains. This will also decay slowly, and the Universe is dead. This is one of the most expected fate our Universe in our list of top 3 ways the Universe will end.

Is the Universe dead forever? It is the question you might ask. The Universe is not gone forever. It will start its race of expansion again after another Big Bang. Theoretically, it might be possible.

After an incredibly long amount of time, there might be a spontaneous decrease in entropy, which results in “Quantum tunneling,” leading to a new Big Bang. 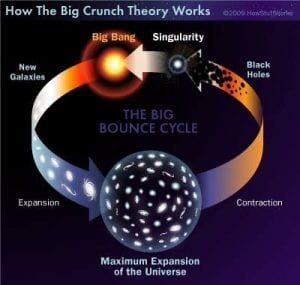 Big Crunch can also be explained as the reverse of the Big Bang. The Universe will start consuming itself. It is one of the top 3 ways the Universe will end. It is a hypothetical scenario where the Universe would eventually stop expanding and starts the contract into itself.

The strength of the gravity force is accelerated and becomes the dominating force by the dark energy decrease. This slowly starts to pull all particles and bodies toward the Universe’s center.

The contraction of our Universe increases the temperature in it. The stars will be destroyed by increased heat.

On the other side, the black holes are combined and would emerge into a supermassive mega black hole, which can contain the entire mass of the Universe and devour.

There is an idea that it could lead another Big Bang, starting the process over again. This theory is called the Big Bounce theory, which gives the impression of never-ending cycles of Big Bangs and Big Crunches. The most accepted fate of our Universe out of the top 3 ways the Universe will end.

Using a combination of X-ray and ultraviolet data, recently, astronomers have found evidence that the dark energy may be getting more robust with time. By comparing the distance of quasars, the researchers found that the Universe’s expansion rate is faster than expected.

In the future, dark energy may get weaker slowly with time since we don’t know about the behavior of dark energy. I hope the Universe will maintain its equilibrium between its expansion and contraction.

Comment your views on the top 3 way the Universe will end and also comment on your idea about the end. Also, share your thoughts about the fate of our Universe.

An enthusiastic person who loves sharing his thoughts through his words. Pursuing his bachelor's degree in automobile engineering from Kumaragu college of technology, Coimbatore. 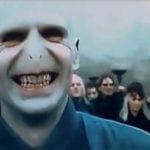 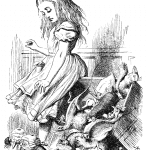