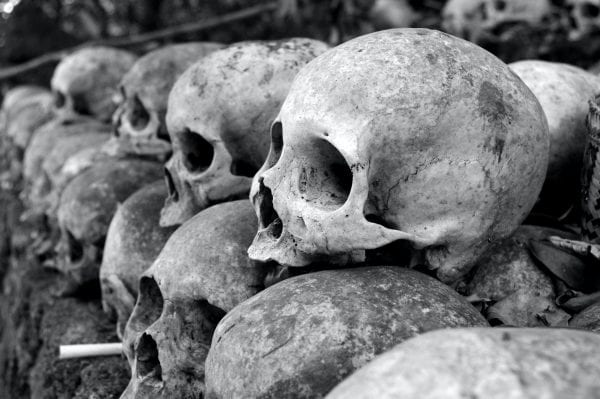 Death is an inevitable truth of life. Every culture has its interpretation of death and the afterlife. Therefore, it is only familiar that each culture has its unique way of bidding farewell to the dead. While most of us are aware of two death customs — namely, burial and cremation — there are dozens of rituals around the world.

The Top Fifteen Weirdest Death Rituals Around the World

The first in the list of weirdest death rituals around the world is the death beads. In South Korea, the remains of the deceased relatives are turned into beautiful beads, usually of blue-green, pink, or black color.

Historically, burial was prominent among the Koreans. However, by the nineties, the people realized that burial land was in short supply, and the government actively promoted cremation as a viable alternative. Another thing that boosted the death beads method was a law passed in 2000, which required that anyone burying a deceased person after the year 2000 would be necessary to dig up that grave after 60 years.

The death beads are made by a company named “Bonhyang.” The founder and CEO of the company, Bae Jae-Yul, revealed that the process cost $900 and was getting more and more popular among Koreans. 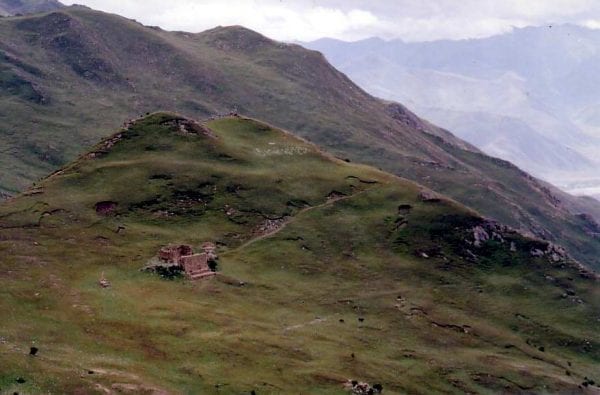 Next in our list of weirdest death rituals around the world is the sky burial ritual. Sky burial is a Buddhist funeral ritual in which the deceased’s corpse is left on a mountaintop to decompose or be consumed by scavenger birds, especially vultures.

Generally practiced in Buddhist-majority areas of places like Tibet, China, Mongolia, Bhutan, and India, these practices have been going on since ancient times. Buddhism believes that after death, a person’s soul leaves the body, which renders it a mere empty vessel. The sky burial is a way to give back to nature.

This is undoubtedly one of the weirdest death rituals around the world! While it may not be universal for all Vikings, this was indeed described as a common practice among the Volga Bulgar Vikings, as defined by Ibn Fadlan. During his travels, Fadlan described the funeral rituals of a Viking chief.

Fadlan said that it was customary for family members of dead chieftains to ask one of his slaves to accompany him to the afterlife. In this case, a slave girl volunteered. She drank and enjoyed merrily for many nights as the body was prepared for the funeral.

On the day of the burial, the slave-girl would have sexual intercourse with six different men. Then a woman, who is called the “Angel of Death,” killed the girl. Their bodies were placed in a ship, lit on fire, and set onto the sea.

This is one of the most unbelievable and weirdest death rituals around the world! The Yanomami tribe, who live in 200 to 250 villages spread across Brazil and Venezuela, consume the remains of their deceased tribesmen as a sign of kinship.

For the Yanomami tribe, death is an unnatural event caused by an evil curse of a rival tribe’s shaman. Therefore, to purge the evil spirit, the body is cremated after being left untouched for 30 to 45 days. After cremation, the ashes are mixed with fermented banana soup. The mixture is consumed by everyone in the deceased’s community in one sitting.

Next, in our list of the weirdest death rituals around the world, takes us to Madagascar. The Malagasy people practice the funeral practice of Famadihana or “Turning of the Bones,” where the remains of the deceased are taken from family crypts and wrapped in fresh clothes. The people carry the body on their heads and dance to music. This process is usually done every seven years.

This practice is rooted in the Malagasy belief that the dead cannot join the afterlife until their remains fully decompose, which may take several years. However, the practice is in decline due to the rise of Christianity and the spread of the pneumonic plague. 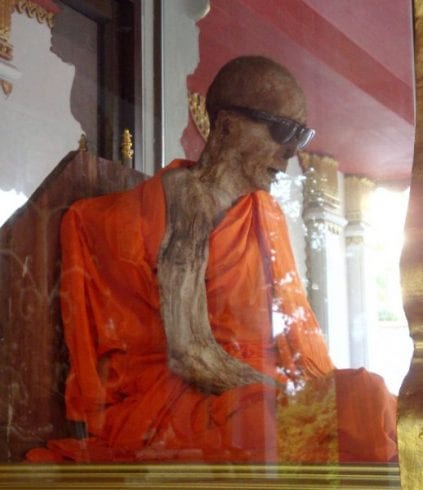 This is another Buddhist custom in this list of the weirdest death rituals around the world. Sokushinbutsu is a self-mummification process that was practiced by Buddhist monks across Asia (mainly in Japan) until the 19th century.

The preparation for this procedure may take between 3000 days to 10 years. A strict diet of pine needles, resins, and seeds is followed, which would gradually reduce all body fat. The monks then gradually reduce and eventually stop all liquid intake, thus shrinking the internal organs.

The monks would starve to death while being in a state of meditation. The body would be completely preserved without the need for any chemicals.

This is one of the funniest and weirdest death rituals around the world. In Taiwan and eastern China, it is extremely common to have strippers in funeral processions. These dances dance atop Electric Flower Cars, which are bright-colored neon-lit cars carrying the dancers. The dancers perform pole dances and stripteases in the funeral and even the gravesite.

This tradition is thought to have begun in the 1980s and was popular among the mafia but has gradually spread to the general population and is now a fairly common sight. 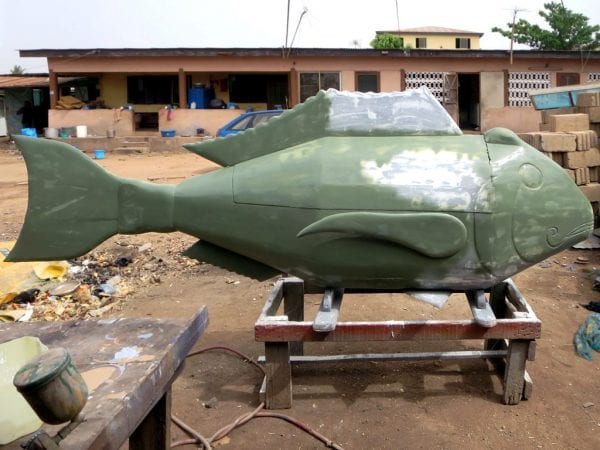 Our next funeral practice in the list of the weirdest death rituals around the world takes to the Accra region in Ghana. The Ga People in Ghana believe in an afterlife and that the dead can heavily influence the lives of their relatives. Therefore, to celebrate the life of the deceased, they use extravagant coffins for burials.

The coffins usually represent the profession of the deceased (like a fish or shoe), although religious and social symbols are also common. Animals which represent the clan totems of the dead may also be added. These types of fantasy coffins are reserved for the head of the families with good social standing.

The Native Americans had one of the weirdest death rituals around the world known as Totem Poles. These refer to the mortuary poles, mainly used by the Haida people in the nineteenth century, which housed the remains of clan chiefs or other high ranking persons.

The poles are made of red cedar logs, and the designs are the inherited family crests of the deceased. There is a small cavity at the top of the pole. One year after the death, the remains of the person are crushed to fit in a box, which is then put in a cavity cut into the wide end. The package was then hidden from the public view by a large board, which usually had the family crest drawn upon.

This can be denoted as one of the craziest and weirdest death rituals around the world. Among the Dani tribe of Western New Guinea, Indonesia, the female members amputate a finger each time a relative dies.

The process, known as Ikipalin, is seen as a sign of mourning through physical pain. It is a voluntary process, and the people do this out of affection to the deceased. It is also thought that the pain keeps the dead’s spirits away. A piece of rope is tied around the finger to cut off blood circulation and make it numb. Then a stone blade is used to cut off the finger, usually by a close family member.

The process was banned by the Indonesian government a few years ago, though it is still thought to continue in secret.

This is undoubtedly one of the liveliest among the weirdest death rituals around the world! Jazz music is an integral part of New Orleans, USA, and the same is seen even during the funeral processions.

After a person dies, a procession begins from a church or funeral home. A jazz band leads the procession to the cemetery. At first, a somber and sad tune is played as a sign of mourning. After the body is buried and on the return journey, lively and celebratory music is played to remember the deceased. There is jubilant dancing involved, and people in the streets often join in the celebrations.

This is the most futuristic and weirdest death rituals in the world! In space burials, the body of a deceased person is cremated, and the remains are then launched into space! The remains are either sent to a destination (for example, the Moon) or are launched and expected to return to the Earth. The ashes remain inside sealed capsules in spaceships that burn up on reentering the Earth’s atmosphere or upon reaching their destination.

The very first man to be buried in space was Gene Roddenberry, the creator of Star Trek, who passed away in 1991. 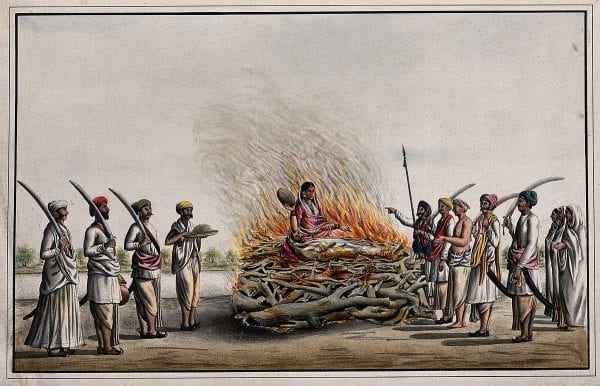 This is among the most inhuman and weirdest death rituals in the world. In the Sati system, the widow of the deceased sacrificed herself on the funeral pyre of her husband. It was common among the Hindus in India, especially among the upper-case clans like the Rajputs.

Sati was practiced since pre-historical times in Asia and had deep roots in Hindu mythology. The word “sati” itself means “chaste woman.” While the process was conceived as a voluntary one, the widow was usually reportedly drugged and forced to undergo this process.

The Sati procedure was finally banned by the British government in 1829, mainly due to the works of reformer Raja Ram Mohan Roy. Today, it is widely seen as a deplorable and inhuman practice and is banned in India.

This is another tribal practice among the weirdest death rituals around the world. The Anga people in the Koke Village of Papua New Guinea have the traditional funeral custom of smoking and mummifying their dead.

According to the Anga people, the bodies of people with high social ranking roam the jungle as spirits if their bodies are not taken well care of. These spirits are thought to destroy farming and hunting. The bodies of the deceased are scraped with bristly leaves and then left in a smoke-filled hut for 30 days.

The organs are extracted using a bamboo pipe, and the bodily fluids are smeared on the villagers. Then the bodies were treated with ocher, which mummified the body.

This is a collection of the weirdest death rituals around the world! The Philippines has a history of traditional tribal funeral customs that are highly unconventional.

In the Benguet province in the island of Luzon, the deceased’s body is cleansed and seated on a makeshift bamboo chair. Then the body is blindfolded, apparently to shield it from the suffering in front of him.

A fire is lit just in front of the body to help the spirit in case it gets lost. This procedure goes on for eight days. Meanwhile, people enjoy spending time around the decaying body and even offer drinks to it.

The neighboring Tinguian people have a similar custom, but they also put a lit cigarette in between the lips of the corpse.

The Apayao people from northern Luzon have the custom of burying their dead below the kitchen area of their wooden homes as a sign of endearment.

The Cavite tribe has a more elaborate funeral process. Once nearing the end of life, an elderly person chooses a tree in the forest. A small hut is constructed where the person lives out his final days. Meanwhile, the relatives and friends of the person hollow out the inside of that tree. When the person dies, his remains are buried inside that tree.

As one can understand, there are several weirdest death rituals around the world. However, these rituals are (or were) neither weird nor unaccepted in their time or place. It merely points out the differing understanding and interpretation of death by various cultures around the world. It certainly makes for a fascinating and exciting read and offers an insight into different cultures and traditions. 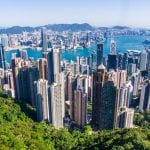 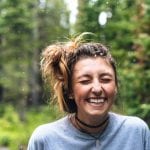