Since I have more guy friends than girls I often hear them complaining about the fact how their girlfriends don’t really get them or how girls simply just don’t understand guys.
So are here few things girls should understand about guys and maybe this would make your relationship much less frustrating. 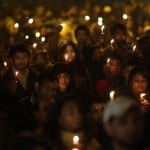