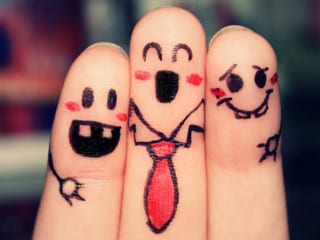 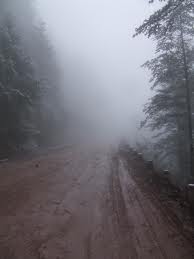 In the land of the lost
mmm….nah.. nah.. na..”
I hummed this song and walked through the red muddy path near the river. The late October Sun with its feeble shine broke the mist and touched my feet. The shrubs went into a deep slumber in the misty evening, and tiny gleams of shades still shone inside them. I could see the red rocks covered in violet moss. I could hear the canticles of the canaries. I could touch the frost and fragile dandelions crowned by the halo of the horizon. I hummed again. “YOU are doomed….” all of a sudden, I crushed my words and took a breath in deep silence. I could feel some one’s footsteps following me. The trails of a murderer…

Now it is getting closer to me. Now I can hear its fluttering whimper. I held my school bag tightly, and my nerves were on edge. As I tried to run away a pair of cold hands pushed me from behind.
“Ahhh….”.I cried frantically. “Ha ha, I got you.” My neighbor Jayne giggled. “What, are you crazy? I thought it was a murderer or something, you fool.” I said. “Oh yeah, all those suspense thriller movies and video games have ruined your head Ryan. Well, let me go now.” said Jayne and entered her house. I waved goodbye to her. I looked back again. I could still feel those invisible footsteps following me. 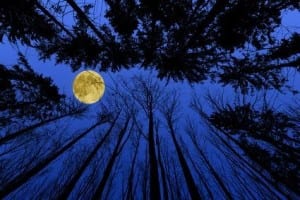 At night, I went to the balcony of my house. The night kept a mysterious sensation. The sky looks uncertain tonight. This silent river in front of my house has been my companion for life. The waves in the river advanced to me in a slow enigmatic tone, burying a deep secret into the sparkling sand. Many yards away, beyond the river, a slender line of faded fire split the darkness and grew brighter in that small mud house. It has been two months since we moved into this place and every night I have seen the fire near the mud house. It was a small house buried in the deep dark, among thick, ghostly trees. The streetlight was far away from that house, and no light touched it except the fire that was lit every night outside the house. The windows of the mud house were always closed, and doors bolted. “Ryan,” Mom asked me to sleep.
****
Next Saturday evening I was playing hide and seek with my friends. Determined solely to win, I went in search for a hard to guess place to hide. After some time, I lost my way and got stranded in a strange place. I looked around with bewildered eyes. It was getting dark. 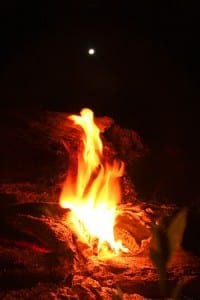 Suddenly, I heard the crackling sound of the fire from behind. It was the mud house, and I went close to it. An old man in torn blue clothes was scribbling something in a black covered book. Once he completed writing a page, he tore it off and put it into the eternal secrecy of the roaring fire. He had a melancholic face, gray hair, a scar ran through his temple and his green eyes burnt in anger as he scribbled the letters in the book.

I went near him. Petrified, he took the book and other papers and went inside the house. I took a half-burnt paper lying on the ground, the last bit that survived the roaring fire and kept it in my pocket. “See, I live in Rosark lane across the river, and I lost my way. Could you please help me find the right way?” I shouted. I stood there for a few minutes, and no reply came back from the old man. Only strange gasps and silence echoed the bare walls of the mud house.

I traced my footsteps back in disappointment. The old man stepped out of the house and took some long dry leaves and lit them up with fire. He gave it to me. We walked past the pine -scented valley, but none of us uttered a single word. We reached the bank of the river. “Thank you.” I said with a smile and shook his hands. His lips began to quiver, and eyes sank in the swire of tears. He looked at me as if he was seeing someone smile at him for the first time. I crossed the bridge and went to the other side of the river. He was still standing there with fire-lit dry leaves. An old man reveling in a glory that even he does not know… I reached home, and Mom scolded me for being late. 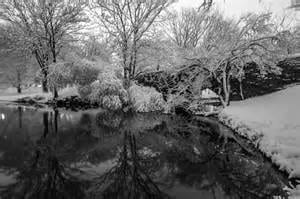 At night, I went to the balcony. A dragon- shaped cloud was now approaching the mud house. Suddenly it reminded me of the burnt paper. I took the paper from the pocket and started reading it.
‘YOU,
YOU alone know the pain untold. Is it the colors that made YOU blind? YOU are the one who killed her and YOU cannot escape for so long.’
Below these words followed a picture with a caption- ‘The Unseen Fingers’! It was the picture of a girl throttled by two black arms from behind. Fingerprints in blood red shades surrounded the girl. Strange enough!
The rest of the paper was slayed by the mysterious fire. I was puzzled and the only thing I understood was that, these letters written in gloomy shades were addressing someone. But who is this YOU anyway? 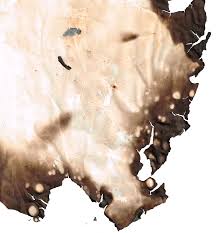 ”Ryan” Mom came near me. “Jayne phoned just now and said that you got lost somewhere today while playing. Where were you?”
“Yes Mom, I am sorry. But the old man in the mud house helped me to get back here”. I said. “Which mud house?” asked Mom. I pointed to the dark mud house across the river. Mom looked at me squarely, cleared her throat and said, “The old man in the mud house is Austin Hawkins, a cold-blooded murderer who killed his own daughter. He was imprisoned for thirty years.” I turned as white as my shirt. Desperately trying to blurt out words, I said, “But, he… he.. was…. nice to me”. Mom interrupted. “ He is living alone there. No one in the street talks to him. So never ever go there again or think about him. Now come, let us have dinner.” Mom went away. I took the burnt paper and dropped it from the balcony. The girl in the picture was looking at me helplessly echoing the utter silence of the night. The wind whiffed and walloped the paper away to the soul of the silent river.
****
For the next four days, I did not think about the old man or watched the fire. And the fire inside the hearth of my heart burnt no more. My heart had become a cold limestone cave of fear, of doubt….. Thursday morning, I woke up dreaming his painful face saying to me. “The irony is when you see me and recognize me, just the way I am.” I took a firm decision to meet him today. I went to the balcony and to my surprise I saw one window of the mud house slightly open, for the first time ever. A thin ray of sunlight entered through it.
I was sitting in the classroom and even the ink in my pen smelled like blood. My mind was swirling around his thoughts- the fire, the burnt paper, the girl in the picture, The Unseen Fingers, YOU….
In the evening, after school, I went to the other side of the river. Passing the meadows, the sunset, and the ash trees, I reached near the mud house. In front of the mud house stood three policemen with nostril caps. People were rumbling over there. I paced forward quickly, but I was restricted to go further. At last, the lifeless body of Austin Hawkins, half eaten by worms and cats was taken to the ambulance. “It has been three days since he passed away and no one knew.” Policemen said with a sneer among themselves. The bustling crowd behind me was showering curse words upon him. They never visited him while he was alive, and now when he is dead, they all came to celebrate it. The so-called ‘human beings’ were fighting to take a snap of his body. My soul shouted. No one heard me. How can they? They have no eyes, no ears, nothing. Their rotten, frozen, demonic eyes were craving for blood!
**** 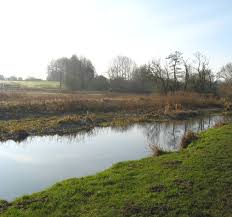 I shook my head from memories. It has been four long years since all this happened. I sighed as I traced my way back home from the tuition class, through the same old muddy path near the river, in a cold misty morning. The cheeks of the leaves reddened with anger as the sun woke them up early. Suddenly, I heard the footsteps of a murderer following me. I stayed frozen for a while and realized that it was my own heartbeats that I have been hearing as someone’s footsteps. YOU know, when you walk through a dark lane in deep silence, you hear the footsteps of the murderer inside YOU.
I reached home and the newspaper boy threw the newspaper at the door. I went through the newspaper. I blinked once, then twice to make sure that I was not imagining it. ‘Newly discovered exculpatory pieces of evidence proved that Austin Hawkins was not guilty.’ I stood still, and I could hear voices from here and there sympathizing Hawkins. ‘Forty years of imprisonment for nothing, for a murder he certainly did not commit.’
That day died and the night was alive. I went to the balcony. The sky looks heavy tonight. There were few stars, but all I could see was the absolute darkness between them. There was no more fire in the mud house. The silent moon and the sobbing river became one soul. My eyes were getting droopy and through half opened eyes I saw a silver line of moonlight entering through the slightly opened window of the mud house.

A fire was lit near the mud house. The fire canoed through the deep ocean inside my brown eyes. I stood up. In the moonlight, through the ignited fire, the half-hidden face of the murderer glided through the shadows of the waves in the river. It reflected my own face. Does it reflect yours? YOU and I killed Austin Hawkins. One thing was certain that there was always a murder hiding in deep darkness, and it has always been YOU….
****
To, The Victims of World’s Sick Fantasies
To, The Old Man
To, The Fire he lit
To, The Silent River
To, The Silver Moon
To, ‘YOU.’