Mascot of the Japanese Multinational Videogame Company – Sega, Sonic the Hedgehog is a cartoonic hedgehog equipped with the ability to run faster than the speed of sound and extremely fast and quick reflexes. Having the advantage of being a hedgehog, he uses it as a tactic to protect himself from enemies by rolling into a ball.  Known for his desire for freedom, justice and adventure, he is widely acknowledged and praised for the numerous battles he has fought to save the innocent and world from forces of evil beyond comprehension and the wicked intentions of his enemy – Dr. Eggman.

The Top 15 Sonic the Hedgehog Facts!

It’s original emblem features striking colours, stars and stripes and angelic wings. According to designer Naoto Oshima, the inspiration for the emblem was the result of a deep fascination for aviation and flight jackets. Originally, Sonic was the name of a hero in a fictional tale made up by the wife of a pilot who had somehow acquired the name “Hedgehog” during his days. The fighter pilot was known for wearing jackets with a emblem of wings with stars and strips on its back. The wife created a children’s book with a story of Sonic in memory of her husband’s legacy.

The main intention of the designers was to create a character with the natural ability to roll into a ball as a defence against enemies. Several ideas were put forth – armadillo, porcupine, a cute dog, etc,..

To land on a final decision, designer Naoto Oshima took his drawings to Central Park in New York City and surveyed people passing by. Hedgehog got the most number of votes, with Eggman coming at second. The latter was appointed as main villain in the franchise while the character of a hedgehog was chosen for sonic.

While designing his character, Sega had decided that they wanted someone the audience would be relate to and would love; someone with a good sense of humour, wit, sarcasm, slight ‘cockiness’, at the same time a champion of the people. 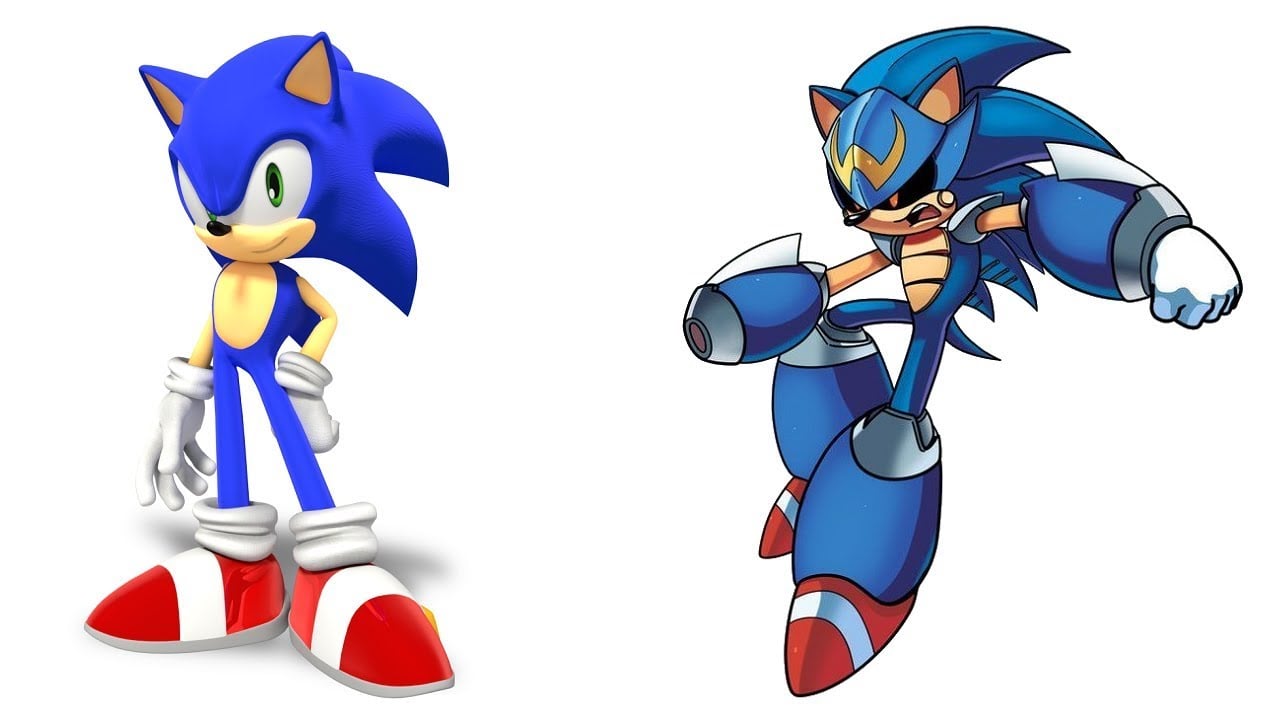 Sonic’s colour was based on the Sega Logo. His shoe buckles and colour were based on Michael Jackson’s look in the music video – “Bad” and Santa Claus respectively. The inspiration behind his personality was made keeping in mind President Bill Clinton’s “get it done” attitude, a motto Sonic constantly upheld during his several battles in Sonic the Hedgehog for good to triumph over evil.

Before Sega decided to select a hedgehog as the character, Sonic was to be a rabbit with long flappy ears. Its main intention and power was to use its flappy ears to pick up things that could be used to throw at enemies and defend oneself.

However developers soon realised having floppy ears would create a technical lag in the game. Moreover, the character would not have the natural ability to roll into a ball to protect itself when required as it did now.

Green Hill Zone was the first and most iconic level of the original version of Sonic the Hedgehog. The design of Green Hill Zone is much more peaceful and aesthetic as compared to other zones in the game. It features a “picturesque mountain paradise” with luscious green fields and blue lakes, palm trees, waterfalls and flowers of various types and colour. Fans and supporters have stated that the design plan for this zone was modelled after the luscious and green landscape of California and its surrounding hills.

It is a commonly held myth that hedgehogs cannot swim in water. Quite the contrary, hedgehogs can be excellent swimmers when it comes to the need to having to survive. Naka-san was one of the 3 brilliant minds behind the creation of Sonic the Hedgehog. One of Sonic’s superpower was the ability to travel at supersonic speed and lightning fast reflexes.

However, Sonic is not able to function with the same agility under water. It was Naka-san’s misconception that led to Sonic’s aversion to water becoming an essential part of his character. Online survey showed that at the time it was created, Sonic the Hedgehog was not the only video game having the roots of such a misconception. Sonic was not able to swim quickly in water, similar to the construction of Super Mario Bros.

As a result of gaining popularity and a large audience, during the 90’s Sonic the Hedgehog was also converted into several spin offs and comics. These comics were popular and well acknowledged for the main reason that they were based on a video game character, that had already received a lot of fame and popularity during the era was created. These comic books till date have retained that fame and popularity. They have crossed well over 275 issues and versions and remain one of the highest grossing comics in the American Market.

In the original version, the character of Sonic had a girlfriend whose name was Madonna, a tall beautiful blonde woman. Like the use of Michael Jackson and Bill Clinton in the creation of his persona and character, the use of Madonna was symbolic of a deep connection of the game to pop culture of that time.

However after its original cut, the character of Madonna was removed. The creators realized the main intent of the game was to portray how Sonic was a champion of the people and an upholder of justice, truth, courage. Featuring on the aspect of romance and love would interfere with the whole goal of the game.

Video games and video game characters were always given credibility in the mainstream media, simply for the fact that they were considered too childish for the larger audience. However Sonic’s 1993 Macy’s Thanksgiving Day Parade Balloon paved the way and symbolised the long lost recognition in the gaming industry. Attempts were made in 1994 and 1997 as well. A similar attempt in the year 2011 marked its 20th Anniversary.

Sonic’s Power Sneakers are a crucial part of his entire costume. One of Sonic’s superpowers is to able to run at super-speed, with or without his shoes. However the designers created these shoes to be completely friction proof, meaning that he could let loose and run flat as much as possible without any pull and push of friction or gravity.

Being friction proof also meant that even after over excessive use of them, these shoes would not wear out easily. Thereby giving his character a more permanent and long-lasting persona.

After his success of music video Moonwalk, Sega and pop star Michael Jackson signed a del wherein Michael Jackson would compose music for Sonic’s third instalment. Although initially Michael Jackson agreed and was thrilled to be part of the franchise and compiled team of musicians and artists for the same, later on he asked to be left out of the credits for the final game as a result of the technical and musical limitations he had to face.

Child sexual abuse and molestation charges against him were made and went public in the year 1993. Following these charges, Sega decided to keep his involvement off the credit list for the final game. The issue till today remains a conspiracy, with no official announcement to prove it. Even today 6 composers are given official credit for the final game. They are Brad Buxer, Bobby Brooks, Doug Grigsby III, Darryl Ross, Geoff Grace, and Cirocco Jones.

Sega in the year 1990 at the time of designing had been on the lookout for a charcter to replace the mascot of the company. Employees and staff members were asked to submit in entries for a new and novel idea. At the given time another crucial factor was the pressure of tough competition at the hands of Nintendo’s Mario.

Among thousands of submissions was an entry of Artist Oshima of a character who looked a little like Mario himself – with a large moustache and a round belly. The entry received so much popularity and vote that Sega decided to include it as the main villain of the game. Although named as Eggman in Japan, Sega of America, having rivalry with its Japanese counterpart, decided to name the character as Dr. Ivo Robotnik in their country.

Sonic’s original name was to be kept ‘Mr. Needlemouse’. However it’s creators, particularly designer Naoto Ohshima, realised that the name Sonic was more easily comprehendible and more easy to pronounce as compared to Mr. Needlemouse. Moreover the name ‘Sonic’ was considered more apt since the character possessed the ability to run at super-sonic speed faster than the speed of sound.

Masato Nakamura was a member of Japanese Pop Group – Dreams Come True. He composed music for Sonic the Hedgehog and its sequel as well. Masato become famous for his creative music after gaining popularity and fame for his music composition in one of the Top 10 Rom-Com Classics – Sleepless in Seattle starring Tom Hanks and Meg Ryan as well as the musical – the Swan Princess. Although the popularity and fame surrounding Sonic the Hedgehog has declined over the past years, its music is known and credited all over the world in present time as well.

Sega of America, believed that Sonic would fail in the United States as a majority of Americans did not even know of a hedgehog. Compared to the Nintendo, Sonic significantly failed in this era as it made use of less popular graphics. Moreover contrary to Japan, Sonic did not achieve much success in the American market. Even after its creation as a 3D game, it did not invite a successful large audience. “Sonic failed where Nintendo succeeded.”

However, now we know that Sonic the Hedghehog movie was a success – and continues to build on its glory as a household name!