India is a land of diversities, right, but it also is a land of contradictions and a land of the most heinous crimes against its women. 16th December 2012 was an eye opener, an incident that shook the whole country from its slumber. We knew about the rape, molestation, sexual assault and eve teasing but that incident spoke about the heinously, the monstrosity of a few men, and we realized that the women are no longer safe in this Incredible India.

Measures were taken- fast track courts, sensitive police, laws that strengthen the victim, but have the rapes, the assaults and the molestations stopped? No. Unless women take up the ammunitions to fight for themselves; there can be no measures that protect them completely. And by ammunitions, I mean the right kinds of ammunitions.
Conceived by Pune-based Dr. Pavan Kohli, Samiidha Bhavani is the brainchild of this doctor. It’s a foldable samurai sword made for women that will snugly fit in a regular handbag of a working lady. The device was researched by the martial arts experts from Germany, the U.K., Singapore and Japan. 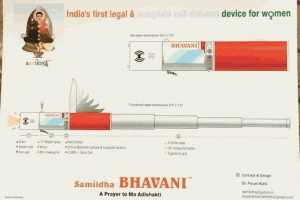 The device was inaugurated by Nirbhaya’s parents last year.

The device is 1.5kgs and about 2feet 3inches long, it is foldable and can reduce up to 9inches which can fit in a regular handbag.
The gadget has five components which makes it so much more than a regular steel sword.

1. Pepper Spray:  A pepper filled spray cannister which lets you blind the attacker or attackers for some moments and gives you enough time to run or shout or do further damage to them while they are incapable of harming you.
2. Panic Alarm Switch: This component generates an alarm in the neighborhood and sends alerts to 5 recipients with the help of a GPS tracker.
3. Stun Gun: This element is non-lethal but can render your attacker incapable of harming you. This Stun Gun can generate enough electricity to stupefy your attacker.
4. The Pen Knife: This element is by far the most dangerous weapon of all. You can do quite some damage with this. This sharp blade is your best mate and last resort if all the others fail.
5. Siren and Strobe Light: The device also generates a rape siren and flashes a bright light that can momentarily blind your attacker.
This device itself is a steel sword that can injure your attacker easily. It also contains a sewing kit, sindoor or vermillion and a mirror. Most critics believe that the beauty essentials are unnecessary burdens on the device while others disapprove of it altogether, and some question its competency. But according to Dr. Pavan Kohli, it is a multi-purpose tool made for every woman. 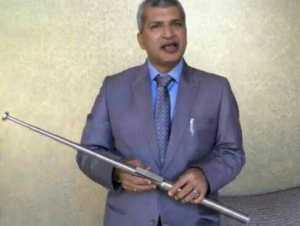 But the question remains the same, can this device or any device for that matter protect the women from their predators? How successful will this venture become can only be judged by time? Will this device be the new “Trishool”, a better ammunition for the women or just another waste of money? Only time can tell. 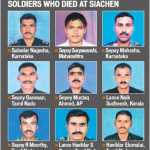 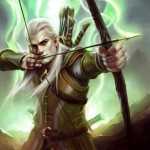