Someone was following her. She turned around time and again and still it would not go away. The house originally had three floors. But in the dream, the floors were endless. When she got up, it was just before dawn. She saw herself lying in the bed with a pained expression on her face, it did not bother her one bit. She left her other self in the dark room and stepped outside the door.

Straight ahead of her, there was a staircase. This staircase originally started from the ground floor, stopped on the first floor and continued up to the second and the third floors. In the dream, she realized, there were no pauses in the staircase. There were sharp turns but only concrete walls greeted her on the other side. Slowly the number of turns became more frequent. After a while, the staircase seemed to change its mind about which direction it was heading to after only two or three steps. With the concrete walls on every side and the darkness below, it made her dizzy and faintly sick in her stomach. 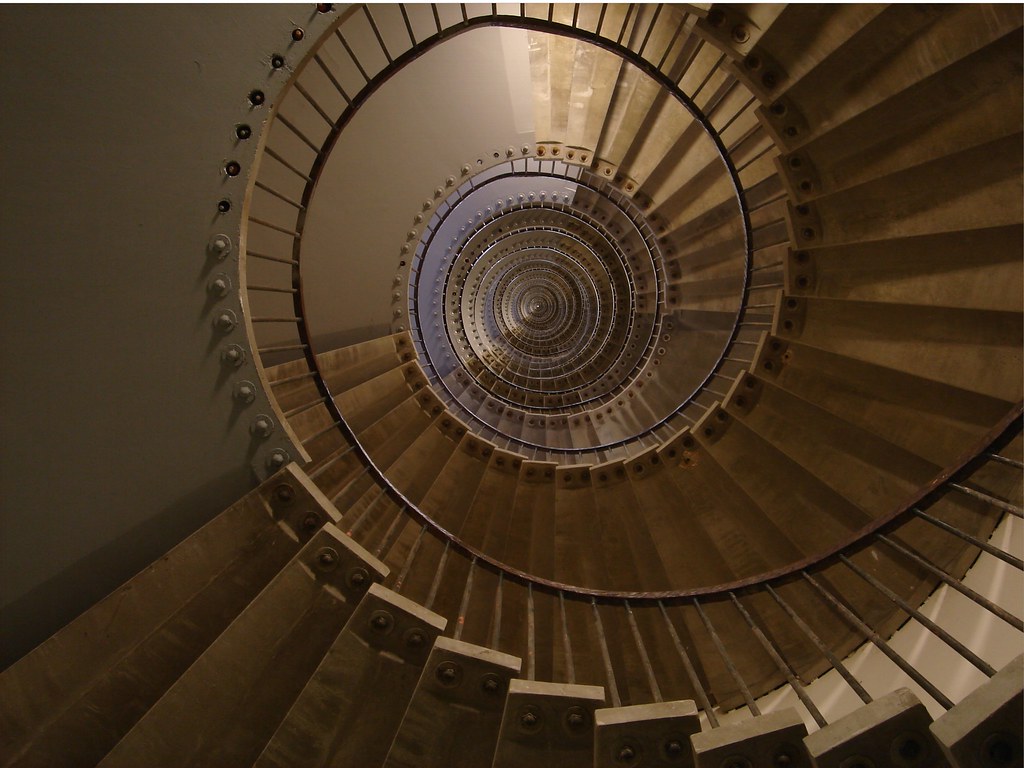 Then the other feeling started, she could distinctly understand that someone was following her. In most of the dreams, it was just a black mass, but this felt different. The one following her had footsteps that seemed like an echo of her own but had a brisk pace. She turned around to look down three of four times, the darkness seemed to swallow her and the feeling of nausea grew. She had escaped from the black mass before, she was not sure about it this time. The footsteps were either climbing down or climbing up, they were either above or below her- in the dream all her perceptive senses lost their edge.

Something else had also changed in the dream, the walls were slowly becoming transparent. It was a sort of a cold invisible barrier. The floors kept on repeating in no particular order but the staircase never seemed to reach its end point. The recurring floors brought in a new kind of uneasiness, she did not know how high above or below the ground she was. There was no question of climbing down, the stairs below her seemed to merge with the blackness surrounding it.

She turned around again. This time she had been sure that something dark had caught her eye. But it was her own stray lock of hair. The other footsteps continued. Slowly a hint of daylight illumined the walls of the staircase. She started running. Morning had arrived, she would wake up soon. As soon as she turned again, a flash of light blinded her. After getting used to the sudden brightness of the afternoon sun, she saw that she was standing on the balcony of a lighthouse. The ocean crashed against its foundations. A strange putrid smell of vomit, which floated in from somewhere close, aggravated her nausea.

The other self gradually moved closer to her. She backed towards the edge to avoid her.

“I don’t understand this.”

She did not know what exactly she was looking for in the chaos of the waves underneath but soon her eyes found a pile of pale flesh. A pile of human beings actually. All of them had black hair, all of them wore the same green pajamas that she was wearing at this particular moment. The wave of nausea was too strong this time and she could not hold it in. When she wiped her mouth and became aware of her surroundings again, she realized that she was standing on the edge of a pool of vomit on the balcony floor. The smell suffocated her and she had to move closer to her other self to avoid it.

“Why? What…”
“Why is there a pile of dead people, who look exactly like you, below the lighthouse? Or, why do you keep falling down if you know you have died here so many times before. Or do you want to ask why you will fall off again today?”
She merely backed against the railing to avoid the other person who was steadily moving towards her.

“Because human beings have the wonderful capability of making the same mistake a thousand times.”

The railing gave away and another body fell.

The other self stepped off the balcony and started climbing down the stairs. It smiled at the million other selves staring through the invisible walls at the different turns of the staircase.

“And one of you will replace me one day when I fall off the balcony.”