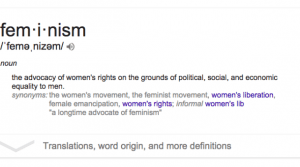 The word at times in itself provides a biased prejudice against the benefits endured by women, is not exactly what is to be consummated out of it. Feminism as defined by the ones battling against it is actually an uprising against the perpetual antagonism faced by women for uncountable decades around the world on a daily basis raging from the minimal aspects of life.

There has recently occurred a barrage of outcry calling out to the idea of ‘feminism’ as unsympathetic and brutal towards the opposite sex. These groups define themselves as ‘Anti feminists’ and do not support the objectives of Feminism. However, there relies a huge discrepancy regarding this prejudiced thought process. To begin with, Feminism does not portray the idea of Women against or to say, over powering men in any way. The term ‘feminism’ was first coined by a Utopian Socialist and French Philosopher in 1837 and since has been used in favor of equality for women to that of men. So, as per the basics of Feminism it stands to provide equality to women and men along with it.

Anti Feminism created a ruckus across social media when a radical group of both men and women started to bash feminism for being overly dramatic and called for ridiculing it since they believe that there exists no inequality and both the sexes have been living in a Utopian world in harmony. These theorists believe that the idea of feminism supports male bashing and the provision of extra privileges to women, which however is not a fact but a misconception and is completely elusive of the data concluded of women’s neglected suffering.

The following examples provide for the provocation of Anti Feminism and description about why fighting against feminism is levity in all sense. 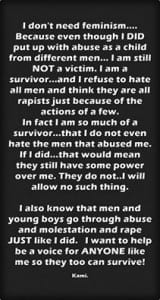 The given picture explains about how the writer claims to not be a victim but a survivor. However, not everyone in the world believes in being humiliated, harmed and coming out as a victor. There is nothing wrong in saying that one has been done wrong with and did not deserve such brutality. The misconception that feminist are portraying men collectively as rapists and wrong doers is untrue. The projection of Feminism stands against the acceptance of rape in a society. Feminists are Not Men Haters. The encouragement that a bound history provides from countries around depicts how a male dominated society objectifies women as sexual play games without their will of it. The ritual of suppressing your voice because you believe you are strong enough to bear anything that is insidious and insulting to your being must be curbed. Feminists never asked men to be quite about their sufferings either, so why are they being blamed?

Most of these Anti Feminist posts begin with a tagline that reads #iamnotafeministbecause
In the above post, the individual is talking completely in regard to her personal life that does not describe the situation of the millions of women who do not have these said basic rights. It is in fact congratulatory that one is not oppressed and believes in equality; has always been counted as an individual who is important. Well, that is exactly what Feminists want. However, not everyone has a life free of suffering and there are innumerable women who are oppressed and are not given even the basic treatments that they should be presented with for being a human.

The absurd knowledge of how Feminists are bra burners, angry, one herded people is illogical.. 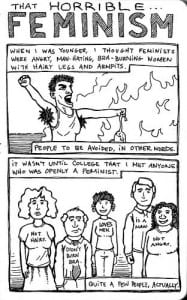 At the end of the day, Feminism is not male bashing and does not demonize men. True feminism does not mean to enslave men or anyone but instead discourages the dominance of any one group over another. Not every man is a rapist. But women are raped, mutilated, burned alive, saturated in male dominant societies which needs to be abated.

The hegemonic countries with a better and stable condition for women therefore must not pry about ‘why feminism is not needed’ because they in real never had the need of it. There exist women who do not have the right to speak for themselves living in a ‘purdah’ world and do need a change that does not cease them to be puppet-ed around like objects.