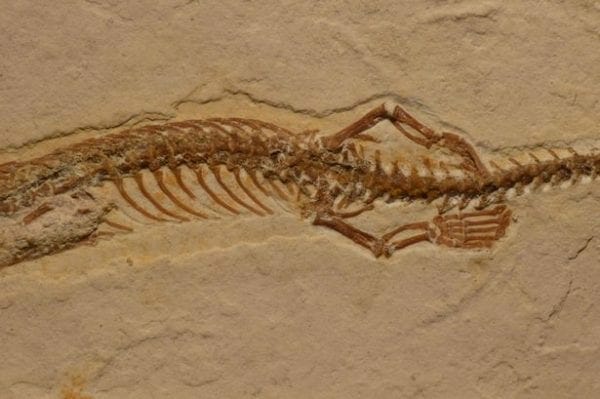 The first four-legged snake stone fossil ever found is forcing scientists to rethink how snakes evolved from lizards. Snakes are known to be terrifying creatures using their bodies alone, but researchers have found the fossils of the oldest snake that had four legs. For long, scientists were puzzled as to how snakes lost their legs and there wasn’t enough evidence coming along. It seems the modern day snakes have evolved from this 120 million year old snake that had four legs. The newly discovered snake has been named as Tetrapodophis amplectus, which literally translates to four-legged snake.

The four legged snake was different from most  we see today. One interesting find from the snake stone fossil however, is that it did not use its legs to move around just like modern snakes and relied on its slippery hold on the ground for movement. The four legged snake used techniques for killing similar to modern day snakes that use constriction as well as biting.

According to research, the four-legged snakes evolved from creatures that used to burrow in the ground and it seems that it used to use its legs for digging only. This is one of the prime examples of the transitional phase where lizards were evolving into the modern snakes that we see today.