The idea of religious beliefs or practices in one’s culture bears great importance as it gives a reason for the people to share some common interests which hold them together and happy enough. But what about the rituals which on the name of certain preconceptions are meant to be an attack on the human race and which cannot be accepted by the liberal minds like us?

We have brought you the 10 weirdest religious beliefs and practices of the world which indeed stand on the idea of the above statement.

In some parts of western India, especially in Maharashtra, this religious belief is common among some Hindus and Muslims families that their offspring would be blessed with good luck and charm, if he/she is thrown from the height of 50 feet from the rooftop on the ground and other people use the bed sheet to catch the child. This ritual brings courage, strength, and good luck to the child according to the people who practice it.

It is a kind of ritual mainly performed in the Kali temple of Southern India. In this art form, people generally dress up as Garuda and get their backs pierced with sharp hooks. These hooks are then attached to the wooden poles which are lifted from ground to the top. It is performed to show the devotion to god.

The digambaras hold a prominent place in the Jain religion. They are part of one of the two main sects of Jainism. Digambaras mainly emphasize the independence of the human spirit. For this particular reason, they live naked with a peacock-like broom that they use to clean their surroundings. By this, they reinforce the idea of equality amongst all in all forms of life.

4. The Ritual of Finger Cutting in the Dani tribe

A tribe of Papua New Guinea, these people are known for their strange ritual. Families of this tribe at the time of their member’s funeral usually cut off their fingers and bury them with the dead body. According to them, doing this shows a mark of love for the deceased family member.

5. No to the toilet for the bride and groom for initial 3 days in Tidong community

It is a very strange kind of religious practice that is followed in the Tidong community in Indonesia. Under this ritual, the bride and groom after their marriage are not allowed to use the toilets for the period of the initial 3 days. As per their belief, if it is not practiced it brings terrible luck to the couple.

In Mexico, on this particular day, the families take a casual visit to the graves of their dearest one. They stay there for the night and party. This was also shown in the movie ‘Volver’ by ‘Pedro Almodovar’. 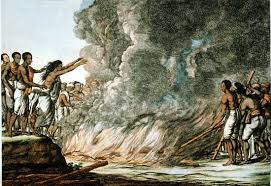 It was mainly practiced in ancient India, but some recent cases of Sati shocked the nation. Under this ritual, the widow used to sit on the dead body of their deceased male partner which in turn used to be burnt alive. This ritual was very dominant during the time of British rule. British records from the early 19th century stated that over 500 incidents of Sati took place each year between 1813 to 1828.

You may believe or not, some of the Argentinians consider the football hero ‘Diego Maradona’ as the real god. These people as per their belief have also laid the foundation of ‘Iglesia Maradoniana’ ( Church of Maradona). As per their religion, their followers must put their second name as “Diego’.

9. An extramarital affair is okay in Indonesia during Pon celebration

It may shock you, but yes during the Pon celebration in Indonesia, people can have sexual intercourse with anyone they want. It is believed by the people that good luck comes to the person who has sex with the same partner on all 7 occasions throughout the year.

During this religious holiday Thaipusam’s celebration, the Tamil Hindu community declare their devotion to Lord Murugan by piercing various parts of the bodies. 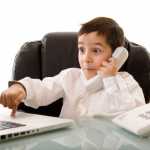 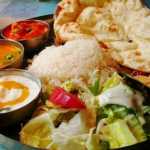