Everybody in Bollywood, irrespective of their fame have the greatest stories of tragedy.

Here’s everything you need to know about Parveen Babi.

Hailing from the ROYAL FAMILY OF JUNAGADH, Parveen Babi the vintage Bohemian Beauty never had a peaceful life. The lights and glamours of stardom took her to a new world of dismay and unfulfilled dreams.

Its true that she was an established actor during the 70’s and 80’s. She was often compared to Zeenat Aman, but though Zeenat bid the limelight a happy good-bye, things were different for Parveen.

What is there to know about Parveen Babi? Well, she was suffering from an unknown fear and endless depression, which in medical terms is known as “PARANOID SCHIZOPHRENIA”. A disease that makes the person afraid of their own shadow.

Parveen emerged as the glamorous Bohemian beauty, who lit up the silver screen with her charm and  unique personality. Here’s something else you should know about Parveen Babi, much before Aishwarya Rai, Parveen Babi appeared on  the cover page of Times Magazine.

Parveen was linked with all her co-stars, starting from Danny Denzongpa, Kabir Bedi, Mahesh Bhatt and Amitabh Bachchan. Her sexy, bold and Western attitude forced the directors to line up at the door to sign her for their upcoming projects.

What most people don’t know about Parveen Babi was that, it was revealed that Parveen was deeply in love with Kabir Bedi and also left her professional career to go to Italy with him. Mr. Bedi was at the peak of his career and didn’t want any distraction, so he broke up with her.

Something else about Parveen Babi, that she even had to abort their child. It was after this incident, that she returned to Mumbai with a zeal to prove herself. And thus she went on to give several hits for the next 5 years and even became the highest paid actor during her time.

But in spite of  reaching the heights of epitome, Babi was not really happy. She wanted mental peace and thus on 30th July 1983 she disappeared from Bollywood like a mystery. Rumors said that she was abducted by the underworld, but actually she went to US, with U.G. Krishnamurthy on a spiritual journey.

Again on 4th April 1984 she disappeared even from US and flew to New York, where she was caught at the John F.Kennedy International Airport after she failed to submit her papers.

It was during this time that she received yet another shock, the people at the airport couldn’t actually recognize Parveen which made her really upset and she started misbehaving.

Thus forcing them to handcuff her and keep her in the general ward with thirty other mentally disturbed patients. 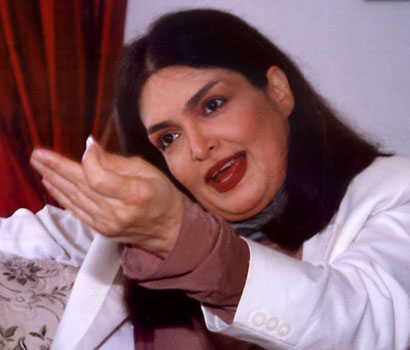 In 2002 she filed an affidavit claiming that she had gathered clinching evidences against Sanjay Dutt regarding the 1993 blast, but never appeared in the court.

She even claimed that Mr. Bachchan and other famous celebrities like Tony Blair actually tried to kill her.The psychological disorder had made her an insane woman.

Some of the spine chilling statements made by her:

“I recommend you to have coke instead of tea, because ‘they’ have been contaminating the milk. At least I get to open this bottle,”

“They have contaminated my make-up so that my skin peels off if I use it.”

During the last few days of her life she recorded all the phone calls, interviews she did or received. Indeed she was a baby who in search of true love and a bit of affection left us on 21st January 2005. She was a star, a trendsetter, but above all a woman, who died a very tragic and depressing death.

Click on the link  to see her last and most probably a very depressing interview.