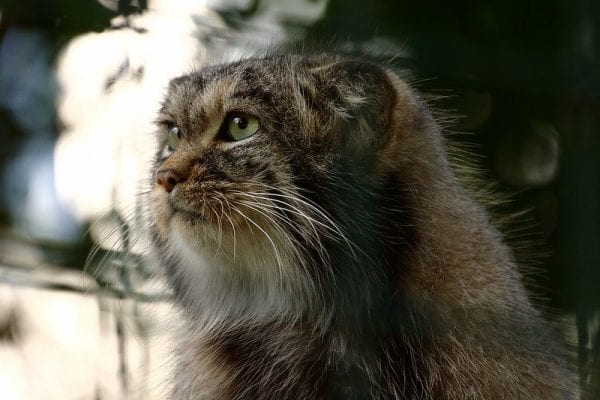 Pallas cats usually make cat lovers go, “Wow! Even 20 of these kittens would not be enough for me!” The response is understandable because Pallas cats (Otocolobus manul) look appealing and incredibly soft or rather fluffy. It’s hard to explain, but their visage is atypical.

Primarily because of their ambiguous existence and abode far in Central Asia as well as Eurasia, people tend to have certain misconceptions around this species. For example: Did you know they are not that squishy or fluffy? Do they look like that for their fur? Well, we will get to all that later!

Their appearance might resemble that of a lazy, timid domestic cat, but don’t let that hoax you! They are a resilient species who call rugged places like the Himalayas and Mongolian Desert their home. 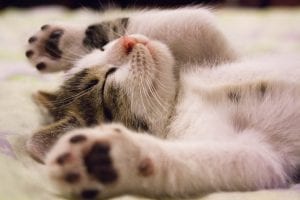 They are the last living members of the Otocolobus genus, and their closest relatives are leopard cats! Now the most frequent inquiry about them is, “Can I own one?” The answer is, of course, not!

To quench your curiosity, here are a few jolly and elucidative facts about the charming Pallas cats that will surely enlighten you about these fluffy little kitties. These will surely leave you bedazzled.

Without further ado, let’s get started!

1. How did they get their weird name?

Pallas cats originally derive their name from the man Peter Pallas. Pallas, a German naturalist, initially in 1776, classified the cats as ‘Felis manul.’

The word ‘manul’ finds its route in the Mongolian language. But later on, the scientific name was changed from Felis manul. The modified and current scientific name of the cats, ‘Otocolobus manul’ is derived from the Greek language.

Now you might think, ‘They don’t look ugly to me!’ And yes, there has always been a topic of debate among the different groups of wildlife enthusiasts. But they play a significant role in their lives and help in hiding! They also serve other purposes, and we will explain that later on in the article!

In the initial stages of his classification, Pallas wrongly suggested that these cats were the ancestors of Persian cats as they resembled Persian cats a lot owing to their long fur, stocky build, and flattened face. But that was not the case, and he was ultimately proven wrong.

Their stout build, combined with a furry coat, gives an illusion of large size to these furry kitties. They aren’t that, to begin with when compared with some other big, wild cats. But the furry coats add to the illusion.

In reality, they weigh somewhere around twelve pounds and are less than two feet in body length. And that is also the adult size. This means the cat isn’t much more significant than your ordinary house-cat, but the dense furry coat makes them a lot look bigger!

Their coats do not just make them look rough and big. It has other specialties too!

3. The specialty of their coats!

The coats do a lot more than make them cute and cuddly.

The unique coat that Palace cats are ordained with forms the essence of their beauty. And, I know you can fall in love with these kitties by laying your eyes on their fur! They are short, stout, clumped, cuddly, squishy, and cute. (I used enough adjectives to adopt one, didn’t I?)

I regret to inform you that these animals are not your domestic dogs and cats. They are designed by nature to exist in the wild and can’t survive well in domesticated environments (it’s heartbreaking, I know)

Their furry coat is most extended near the belly, which is very convenient as it keeps them warm in winters and when they are hunting on frozen grounds. The hair density and color pattern of the coats also keep changing, depending on the season.

During winter, the coat takes up a uniform gray color, and in warmer months, you will find the skins evolving into a red-toned hue. 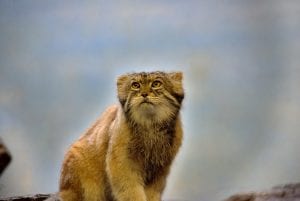 The coat pattern also helps safeguard these cats from predators. They help to blend in with the surrounding environment. The plush, dense coats can be acknowledged as one of their survival kit in their rugged, harsh habitat.

4. They have different kinds of pupils as compared to normal cats.

You might have noticed your domestic cat and caught her staring at you. You will see the consistent judgment but the innate beauty of their eyes is also eminent. The eyes of the Pallas cats are contrasting. They are round, unlike the vertical pupils of a standard cat. 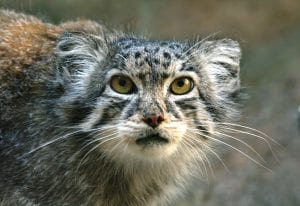 But when compared to larger cats like tigers and lions, you will observe the closeness of their pupils. Want to know why some cats have round pupils and why others have vertical ones? Click here if you are a cat lover and want to gain more knowledge on this topic!

The unnatural pupil shape has a direct relation to the animal’s role as a predator or prey in the food chain.

Mainly these with round pupils are the indicators of ambush hunters who prefer to prey during the day and late at night. In comparison, those with vertical slits are not foragers who chase their prey and hunt close to the ground like your regular pet cats!

The rounded pupils, as mentioned before, are gestures of ambush hunters. Pallas cats generally sustain on pikas and stalk their prey using large vegetation or stone as cover.

Also, their furs help in concealing themselves with the environment very conveniently, which is nifty during hunting. On certain occasions, the Pallas cats even wait for their prey (marmots) outside their marmot burrows, and they are ready to pounce as soon as it’s inhabitants exit.

While the Pallas cats are excellent at ambushing, they are terrible runners and therefore, cannot be called foragers that charge their prey over long distances.

I think you can easily infer this attribute by just looking at them! Their substandard running capabilities, for the most part, is due to their short, stout, and stocked builds!

Unlike other wild cats, they lack strong, lengthy hind legs that aid in running. But the assets are more than enough to survive and hunt well in the environment that Pallas cats are a part of.

When chased by predators, they conceal themselves around boulders and small crevices!

7. They have a brief mating period!

The main breeding season lasts from December to March. The babies are born between March to May after a gestation period of sixty to eighty days. 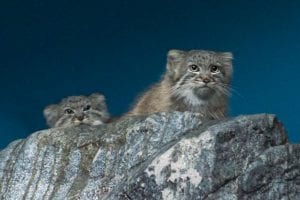 Litters generally have three to four kittens, but females can occasionally give birth to almost eight little kittens. These kittens are independent by the time they are three to four months old and can procreate at eight to nine months!

8. Pallas cats may be closely related to leopards!

Peter Pallas suggested that Pallas cats might have a relation with Persian cats. 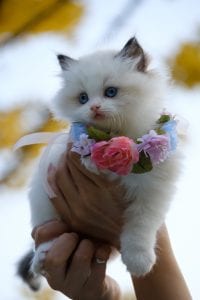 It looks like he had an impeccable sense of humor, but he was entirely wrong.

Later, looking at various traits, experts have concluded that the wildcat’s closest relative might be the leopards.

9. They lead a solitary life!

Apart from the short mating period that they get together, Pallas cats are territorial, with both males and females using their scent to mark their territory of about three miles.

They spend almost the entire day in their caves and crevices and come out at dusk only when required. The love for solitude is not only limited to another animal. Behavioral studies show that these cats don’t even like the company of their kind.

Bill Swanson, the Cincinnati zoo’s director of animal research, made an observation. Zookeepers of that zoo heard some weird noises while taking care of such a litter. At first, they thought the kittens were having trouble with breathing and rushed to their aid.

But after a bit of analyzation and examination, they realized it was just the kittens growling at one another! Maybe this is the reason introverts of the internet call Pallas cats their spirit animals!

10. The Internation Union classified them as “NEAR-THREATENED.”

We know that these cats live up to six years from recent research, but this number took a huge hit.

In 2002, they were classified as a threatened species by the International Union for Conservation of Nature, and the status remains the same even today.

You might be thinking, “Why is everything beautiful threatened nowadays?” And we are entirely responsible for this as we do not know how to handle the freedom given to us.

In our twisted idea of doing whatever we want, we end up destroying these beautiful lives. We are encroaching the natural habitats of these species. These wildcats are not the only ones being harassed. Nature is slowly subsiding into nothingness.

These were some of the most uncommon facts about Pallas cats. Click here to know more facts about such unusual animals.

Now to the question, you all have been dying to know.

Is there even a slight chance of keeping these animals as pets?

The answer is probably no. Because Pallas cats are uncommon even in zoos. There are 42 Pallas cats present in zoos worldwide.

They face many threats like poaching, prey depletion, and habitat fragmentation. Even the hunting dogs act as their predators. This is the reason they have been labeled as an almost extinct species.

Moreover, there is a huge demand for them in the exotic pet trade. Though this trade is instead an uncommon one, it does take place in Afghanistan and Pakistan. They even hunt and entrap Pallas’s cats for the tourists. This influences the tourism industry as well.

There is an organization for the well-being of these cats called Pallas Cat International Conservation Alliance. It raises awareness on this topic and even wants to increase the number of these cats in zoos for their safety.

Sadly for you, Pallas cats tend to hate captivity and are not so happy when they are held captive. Also, they cannot adapt themselves to the lives in the lower altitudes. They are prone to the bacteria and viruses found in the upper altitude, but the same does not happen when they come to the lower altitudes!

They even have the highest mortality rate of all small cats. Though the lifespan of these cats in the wild is unknown, they live for eleven to twelve years when held captive.

Another one of the reasons why you cannot keep this as a pet is the kittens cannot survive in captivity. This is why they are not a part of the western trading industry. However, the poachers do make these small mammals breed in captivity and benefit from them.

For this reason, it is illegal to keep such a wildling in your home. Moreover, this poor cat cannot adjust itself to our environment and will probably suffer a lot! This nocturnal and solitary feline cannot possibly adjust itself to the human surroundings.

These were everything you needed to know about a Pallas cat! We sure hope you were benefitted a lot from this article.

Pallas cats are one of the least studied felines in the world. We need to spread awareness about these beautiful wonders of nature and save them from extinction. We can raise funds and probably save this rare species from extinction by spreading awareness among animal lovers!

Have you ever come across a wildcat in your life or studied its features? Do let us know if you know more about this original grumpy cats! 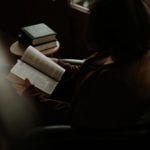 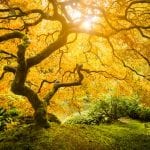