The purpose of any relationship is to effect a lifelong companionship. It is not unusual that Romeos and Juliets abscond themselves from their phones and pull down an iron curtain in their conversation at times. They are expected to continue their interaction, which is an inevitable element, at least for those who do not wish get rid of each other in the long run. The ego that guides them to wait for the other to break the ice, particularly during fights, has invariably resulted in causing unforgettable physical “bruises” and fractures on the men-folks.

I believe those machos who read Economics and Political Science might have managed to put a cap on their expenses on first aid and medication to an extent. Guess why? Yes, you are right. It’s none other than the numbers who come to their rescue. Here, taking up the role as a love guru (though I am still single), I would like to share how I managed to reduce my visits to hospitals for accompanying my roommates.
Grabbing inspiration from John Forbes Nash (A Beautiful Mind fame) and considering romance as a game, I have diagnosed that the players (my friends) are suffering from Prisoner’s Dilemma. To be frank, my medication worked. The most difficult decision for the players (couple) to arrive at, during a strife is who will take the initiative of resuming the conversation.

This question keeps themselves dumb until the ‘notification LED’ blinks in their respective phones. More often than not, such “silent wars” have also led to the deletion of many “janu(s)” and “meri jan(s)” from the contact lists. The games become more complex when the number of players in the contact list increases from “janu1” to “mera dil∞”. Anyway, the payoff matrix for the ‘ideal’ 2 x 2 chocolate love sagas in their rational decision making is as follows. 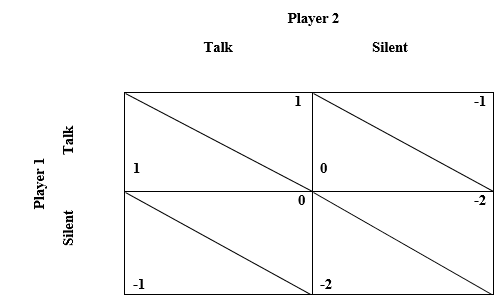 Assuming the player 1 and player 2 to be a Romeo and Juliet respectively, if he begins the talk while his love keeps mum, the former gains a better pay off of ‘0’ than the Juliet who gets away with -1. The payoff for a situation wherein both are not ready to give their ego up and break the silence is ‘-2’ for each as it does not provide any utility rather than a scar on their bond or a chance of eventual breakup.

The Tale of Relationships

He scores a point of ‘0’ as he feels comfortable when he shifts his strategy for the reason that he initiated the conversation which is better than what his opponent earns when she is still silent and she earns ‘-1’ owing to her slight relief over his approach.

However, it still remains in ‘0’ as he is not completely satisfied since a one-sided initiative doesn’t prove fruitful. So is the case for his love as well. She also receives a payoff of ‘0’ when her man is not willing to open up as against his point of ‘-1’. Finally, the strategy of a complete departure from their ‘silent mode’ provides a diametric opposite payoff of ‘1’ for each, from which none of them may have an incentive to change their strategy as it endows the maximum possible payoff among the given strategies.

Hence, the payoff ‘1, 1’ constitutes a Nash Equilibrium. Moreover, a rational player is expected to immediately eliminate a strictly dominated strategy. Here, the strategy ‘1, 1’, i.e. “talk, talk” strictly dominates all other strategies when we draw a parallel between the strategy profiles in terms of the payoff structure and by applying the Iterated Elimination Strictly Dominated Strategy. In extraordinary circumstances such as if any of them do not long for each other, then it is highly recommended to let the silence reign. Relationships work, and they don’t.

After all, it is always advisable for every young roses who desire a life together, to set their ego aside and open the WhatsApp without fail to usher in an era of healthy relationship rather than a fading line in a stream. Yes, I repeat. My prescription works!!!

**Note-Silence up to 1 hour is permitted during clashes. (Pun intended)

Mr. Adarsh Vijay is currently pursuing his Masters in Political Science at Madras Christian College, Chennai. Mr. Vijay is a blogger and possesses a passion for writing, poetry and teaching. His academic interests vary from Strategic Studies, International Relations and particularly to Game Theory. Moreover, he is a regular contributor to 'The Bridge', the annual magazine of the Department of Political Science, MCC. He loves music and is an orator too.