Every country across the planet has its own unique culture, its own wonderful traditions. However, seen from the outside, the subtleties and nuances of these age-old traditions are often lost in translation, giving rise to generic stereotypes through which we view the world around us. All cultures have their own stereotypes of ‘outsiders’, so we are all equally guilty in this crime of generalisations. Be that as it may, here are a few of the more common and hilarious stereotypes that we associate with the different nations of the world.

The French are seen as the best lovers of the world, with Paris being the romantic capital of Europe. The French, in the popular imagination, have the best sex of them all, not to mention the kinkiest! For centuries French romances have been famous throughout the continent, and have travelled all over the globe with the European colonisers. Romantic poetry and love sonnets are considered to be a specialty of the country!

Perhaps this reputation stems from the super-strict and authoritarian Nazi regime of the early 20th century, but the common perception of Germans across the planet is one of grim military discipline with little room for fun or leisure. The Germans are seen as efficient workaholics and ambitious administrators who would stop at nothing to achieve their goals. This is not a country to be taken lightly – literally or figuratively!

The nation of Japan is a land of contradictions – the place where tradition meets modernity. With cutting edge technology and state of the art scientific innovations happening everywhere, Japan is yet a country steeped in age-old traditions and culture. They have the general Asian respect for old age and the traditions of yore, while at the same time having adopted the Western morals of individuality and innovation. The resultant culture is one that has given rise to some of the best manufacturers in the world, along with the weirdest anime imaginable!

If there was ever a nation that epitomised the spirit of capitalistic consumerism and ostentatious consumption, the United States of America is it! With the largest cars, the biggest burgers and the fieriest drones, nothing symbolizes Americanism as an excess of everything under the sun. From the massive splurging contest that is Hollywood, to the famous roulette wheels of Las Vegas that make and break fortunes with every spin, the Americans have earned themselves a reputation for being the biggest spenders. Watch your local hawker get dollar signs in his eyes the moment he spots someone who looks even remotely Yankee! 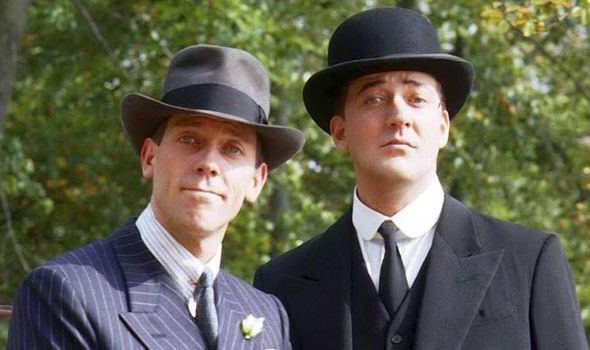 Well, if you’re British, you’ve just gotta be prim and proper about it. The stereotype of the ‘pukka sahib’, going back all the way to the days of the Raj, hasn’t yet completely faded from the popular imagination. So you’re not really British unless you tip your hat upon meeting an acquaintance (and we don’t really care if you don’t wear a hat anymore, you’ve just gotta tip it), and lift your tea-cup with an extended pinkie. And if finally you can check all the boxes, you better have at least one picture of the Royal baby in your back-pocket; just for verification, of course!