The entertainment industry is a facade of glitz and glamour which hides a dark interior. Many celebrities have achieved the pinnacle of fame, but have passed away in mysterious ways – suicide, murder, assassinations, Hollywood abounds in them all. While it is not common to see celebrities overdosing on drugs, there are cases in which the information provided has caused conspiracy theorists to disagree. Here we look at five mysterious celebrity deaths:

When newspapers printed the starlet’s sudden death on 5th August 1962, the world went into a frantic frenzy. After all, until Marilyn came along, the world had not seen a more controversial and sultry damsel with a rags-to-riches fairy story to match. The tabloids ruled it as an accidental overdose of sleeping pills which led her into a coma from which she never woke up.

However, people close to her came up to say that Marilyn was used to taking those pills and knew what quantities were necessary. It was hard to believe that she would “accidentally” overdose on them. Conspiracies began to arise, the most prominent one being a murder orchestrated by John F. Kennedy with whom Ms Monroe was allegedly having an affair.

Also three months prior, during a stage performance on Kennedy’s birthday, she had been referred to by the anchor as the “Late Marilyn Monroe”, though this could have been a jab at her fashion always to arrive late for an event. It was her last public performance.

Probably the most mysterious of them all, for how can such a high profile case remain unsolved till date? Hailed as the best rapper of all times, on September 13, 1996, Shakur was shot down by a gunman in a case of drive-by shooting in Las Vegas. The killer or who had ordered the killing was never caught.

Tupac’s death was shrouded by whispers of Illuminati. It was believed that he wanted to break free from their shackles. To this extent, his last album was titled “Killuminati”. He was only 25. Shown here is the last picture was taken of him, just minutes before his death.

In 2009, the King of Pop bade us an eternal goodbye. It was found out that he had died after being administered a cocktail of certain medications. It was also known that he had constantly been abusing his medications for quite a long time.

However, Jackson’s family came forward with several claims that he didn’t use those particular medications and that his health had never been deteriorating as the police had claimed in their reports. While these claims were never given ground, conspiracy theorists were soon to claim that the suicide or overdose was faked.

One of the most celebrated magicians and daredevil artists of all time, Harry Houdini was the first of his kind. His hairbreadth escapades and Chinese water torture cell – the pinnacle of his career –  had floored generations but it was only natural that his death is a mystery as well.  It is uncertain as to how Harry Houdini died.

We know that he suffered from acute appendicitis. His demise may have either be caused by peritonitis from a ruptured appendix at the age of 52, though no one knows what exactly set it off.

Probably the most confusing deaths of all! If Elvis’s personal life had not been enough fodder for tabloids looking for a scandal, his death certainly gave them a lot. In 1977, his lifeless body was found on the floor of his bathroom.

Several suggestions arose such as drug overdose, heart attack or an allergic reaction to some medication. However, interestingly, there have been several sightings of Elvis even after his death by a lot of people which led theorists to wonder if the singer had in fact faked his death. Two tabloids even continued to publish what they called his continued life. It is claimed that he “actually” died somewhere in the mid-90s at the age of around 60.

These are only a handful of the mysterious deaths that govern the industry. 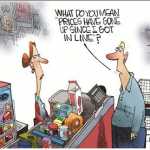