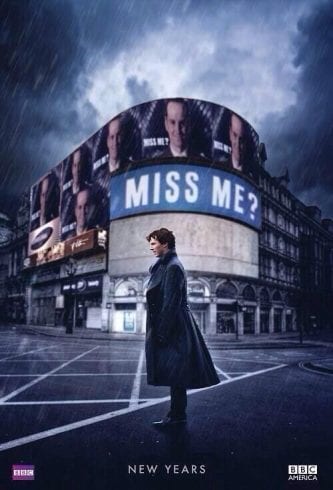 Okay, this post is dedicated to all those who have faced many deaths and rebirths while waiting for BBC Sherlock season 4. While we have to wait almost 3 years for 3 episodes, the Supernatural fandom has not shied away from showing off with their innumerable seasons containing innumerable episodes.

Anyway, since this particular fandom- the Sherlock fandom- is more than a little bit cuckoo and the insanity is mostly accepted instead of rebuked, I have decided to list some of my personal show theories.

Let’s start off with Moriarty, how exactly does he plan to come back? I have 2 theories about this.

The “Miss Me?” that flooded all the London screens doesn’t have to be made by Moriarty himself. Anyone can make a 2 second video like that by using any of Moriarty’s old videos (and we do know Moriarty probably had tons of videos of himself because he actually used a very well-edited one of himself narrating the story of Sir Boast-a-lot in the taxi.)

The thing is- Moriarty may not have done this at all because he does not need to be alive to do this. Think about this- what was the first effect of Moriarty coming back? Sherlock did not have to go on that mission to Eastern Europe which would have cost his life in roughly 6 months.

So most probably, it was a well-wisher of Sherlock who had orchestrated the whole thing. Moriarty coming back to life did not harm anyone and moreover, brought Sherlock back. And whom do we know who had enough power and love for Sherlock to arrange this whole thing? Mycroft, obviously.

Andrew Scott has been included as a cast member of Sherlock Season 4 but that doesn’t necessarily have to mean that Moriarty is coming back. Doyle had numerous other villains in Sherlock Holmes and almost every season has one titular villain- Moriarty of season 1, Adler of season 2 and Magnussen of season 3.

Since Moriarty had a considerable amount of influence over the second season too, I don’t think they’ll keep repeating the same thing over and over again. He may simply appear as a memory or an inhabitant of Sherlock’s mind palace.

Okay this may sound boring but I think this is more likely to happen out of the two theories. What if the Moriarty that we know has never been Moriarty in the first place?

Think about it for a minute- the Professor Moriarty in the books almost never reveals himself in person. He does reveal himself right before his personal revenge but that makes sense because in the books- that is his end of the journey. He does not come back to life like Sherlock.

But this consulting criminal rarely involves himself this much into the crimes. He pulls the strings and organizes everything yes, but he isn’t bodily present everywhere like this show Moriarty. Now, it is true that the book version of Moriarty is much older than the show version but for this particular theory let’s consider a different reason for his lack of involvement. 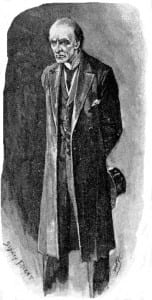 What if the Moriarty that we have seen till now (Jim from IT), wasn’t THE Moriarty at all? What if he was just a face of the Moriarty who has ingeniously still remained behind the veil? So even if the face dies, the brain stays. Honestly, there is no particular reason for the apparent Moriarty and the real Moriarty to be brothers, let alone twins. But it would make sense from a practical point of view. 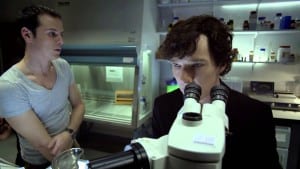 Like I said, we already know that Andrew Scott IS a part of the cast. So making him come back as the Real Moriarty would have much more impact that having another new actor take his place. And this can only be achieved by making the apparent and the real Moriarty identical twins.

As a conclusion, I’d like to tell you that my theories may prove to be completely untrue and you may have plenty of reasons for refuting them. I just came up with these explanations because of 2 main reasons:

1. I had nothing much to do. The hiatus has fried my brain. I have been re-watching the three seasons continuously.
2. I would hate it if they actually brought Moriarty back to life since that would be so repetitive after Sherlock’s resurrection. They cannot possibly keep using the same trope again and again. Even Irene Adler resurrected herself for God’s sake!

Also, thank you Moffat and Gatiss for the Christmas Special. It has been scheduled on 1st Jan, 2016. PLEASE do not postpone that any further.