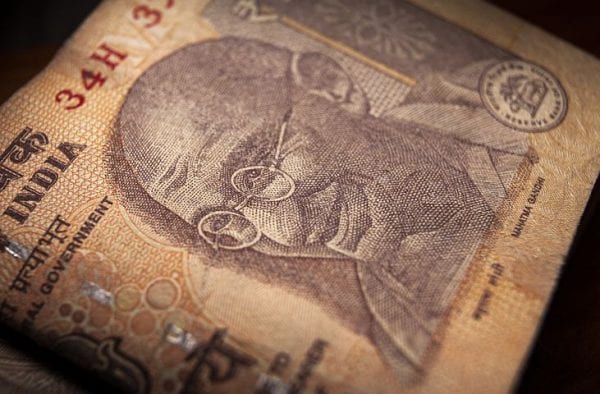 Economic Conditions of every country can be defined by the value of its Currency and its quoted several times money can’t buy happiness but in this Capitalist world it can make you comfortable in this miserable world. It is important to know what is affecting the current Economic Situation before that lets us get aware of our Money and hence Indian Currency.

There are many interesting facts about Indian Currency let’s take a look at some of them. 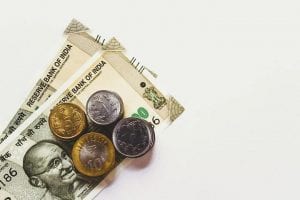 History of Indian Currency begins in Ancient India in 6th century BC. After the Barter system, first-time coins were used as a way to exchange goods during the era of Mahajanpadas and they were of different shapes having different symbols. As the years passed different kings used different kinds of metals like silver, gold, copper & lead with unique inscriptions in them. It was only after the Mughal empire monetary system was one for the whole subcontinent.

‘Rupiya’ and ‘paisa’ was introduced by Sher Shah Suri. It was only after British people came, first paper currency was issued by Hindostan Bank, Bengal in 1861. Reserve bank of India came into existence in 1935 and started issuing Indian Notes. After the Independence, Republic India handled its currency with Respect and Dignity.

Here are 20 interesting facts about the Indian Currency

1. Rupees is Not Made of Paper:

Indian Rupees is not made of paper as it appears to be, it is rather made of Cotton and Rag. It is the pulp of cotton, balsam, dyes, and textile fibers. I am sure its paper-like appearance must have fooled you. This is done so, so that fake notes cannot be easily made and there is no Corruption.

It must sound weird that people had to beg to beggars for coins but the interesting fact is that Eastern stated faced a major shortage in coins and when investigated the reason for this was smuggling of melted coins to Bangladesh to make metal daily used objects like blades.

At one point worth of one rupee coin was 35Rs. And the most interesting fact about Indian Currency is that to tackle this problem workers started using cardboards of the same size and had its worth written on them.

3.Minting of the Indian Coins: 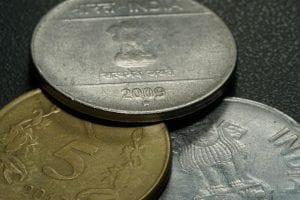 Have you ever noticed small symbols in coins? If not then do it now. resting facts about Indian Currency say that all the Coins have four types of symbols beneath the dates and they vary according to places they are created in. Isn’t that interesting how we have unity in diversity here too? 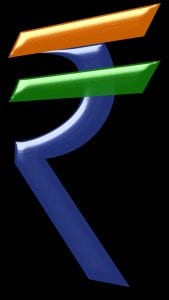 Indian Rupees interesting symbol came into existence in 2010 and was created by D.Udaya Kumar. The symbol is designed uniquely by the combination of Latin letter ‘R’, Devnagri letter; र’ and the parallel line denotes the tricolor of Indian Flag. He was awarded 2.5 lacks for making it. 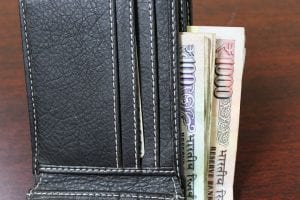 The newer notes are of the same height unlike the previous 1000 & 500 notes, RBI decided to do this based on complaints by users that 1000 & 500 rupee notes used to stick out from their wallets. Because of this change, the counting and handling of money becomes easier. Another interesting fact about Indian Currency, the length of the notes is according to their domination. So the width difference between a 200 & 500 note is way smaller than the length difference between a 500 & 2000 rupee note.

Hyderabadi Rupee and Indian Rupee were issued at the same time. Hyderabad was the only princely state that was allowed to issue its Notes. It was in existence from 1918 to 1959. For 9 years they were printed as Indian Rupee was introduced in 1950. The interesting facts about Indian currency tells us that 7 Hyderabad rupees = 6 Indian rupees. The last i.e., fifteenth Hyderabad Notes issued by Dr. G.S. Melkote used to be in Brown and Multicolor.

British Raj witnessed the highest Indian Rupees that was printed by RBI in 1938. It was demonetized in 1946 but reintroduced in 1954. Finally it was demonetized by Morarji Desai in 1978 along with 1000 and 5000 Notes. It featured the Ashoka pillar.

9. Countries Where Indians Can Travel in Cheap Because of Strong Currency: 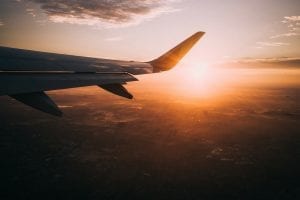 If you love to Travel and Money is one thing that is stopping you to do so here is the solution to that problem. Here is a list of Countries with value of Rupees so next time you plan a trip you have this in the back of your  head:

Visually impaired people exist in this colorful world with a little less trouble only because of the unique help provided by others. So what if a person cannot see but one thing that every human has is the sense of touch. Interestingly Indian Rupee also has taken into consideration of those
People and different notes have different signs they are in geometrical shapes and are present in the left side of the Note, it is made in a way that can be recognized just by touching it. This strategy of helping blinds in a way liberates them and gives them the opportunity to become Independent.

After the Heartbreaking Partition of India and Pakistan in 1947, Pakistan continued using Indian Rupee as it is just with a stamp of Pakistan. It was only after July 1948 State Bank of Pakistan came into existence till then Reserve Bank of India was the common authority for both the countries that issued Notes. 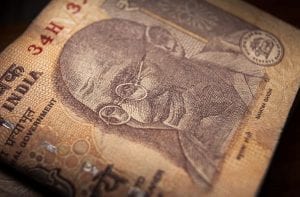 Indian Currency that is at present used is Mahatma Gandhi Series. All Notes have different pictures on it these pictures are of important Monuments, People, Sites, and Temples & Animals. This is done to represent India’s Culture and Biodiversity to the world. Our Currency in a way represents our Country throughout the Globe. Indian Notes has these pictures in it:
₹5 – Tractor in a field
₹10 – Elephant, Rhinoceros, and Tiger.
₹10 (new) – Konark Sun Temple.
₹20 – Port Blair lighthouse and Mount Harriet.
₹50 – Indian Parliament House.
₹50 (new) – Hampi with the chariot.
₹100 – Himalayas
₹100 (new) – Rani Ka Vav (Queen’s Stepwell)
₹200 – Sanchi Stupa
₹500 ( new) – Red Fort
₹2000 – Mangalyan

All of these pictures represent the Incredible India.

14. Rupee When Compared to Dollars: 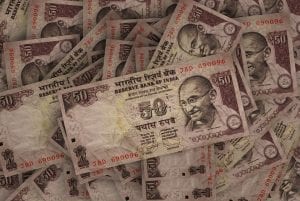 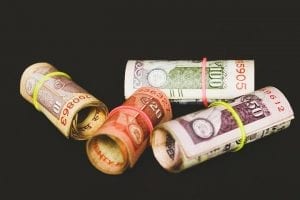 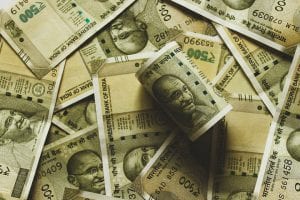 America is a Super Power in the Fast-Growing Economic World and the Currency i.e., Dollars is usually compared by other countries to judge the value of their Currency. At present the Value of Indian Rupees is not something that Indians can be proud of as $1 = 75.88 ₹. In 1917, the ₹ was more powerful than the $. 1 ₹= 13 USD exactly.

But how did this happen as India comes under Developing Country? Past has the answer to all our questions After Independence of India from British the value of Indian Rupee was set to be equal to British Pounds, and the value of 1 dollar was equal to 4 pounds which means that the value of Rupees was the same. The Decline in value began from the 1961 Economic crisis and since then it has been a continuous decline to date. 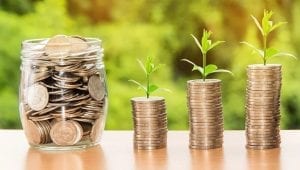 Notes that are issued and being used have all of its provisions according to the Reserve Bank of India Act, 1934. And all the rules and provisions that are related to coins are according to the Coinage Act, 2011. An interesting fact is that it applies to the whole country. The Act gives Guidelines that have to be taken into consideration, it guides about:

The Small Coins (Offences) Act, 1971 also states that the RBI can issue the coins up to the denomination of ₹1000.

A one-rupee coin and more than that can be used to settle any given amount or sum. However, a 50 paise coin cannot be used to pay any amount more than Rs 10.

17. How Many Old Notes are Destroyed?

1500 Crore old notes were destroyed after the Demonetization of Indian Currency on 8 November 2016. Every year a large number of Notes are destroyed due to miss handling of these precious Notes by people. In 2010-11, just in one year 1385 crore of worth Rs 1,78,830 crore were destroyed. These numbers give us a lesson to be careful next time when we use these Notes and try to reduce the loss as much as possible for the whole Country.

One of the most interesting facts about Indian Currency is that along with other Notes and Coins it has a Zero Rupee Note, it sounds weird because we all know that zero means of no value but its goal was to help citizens to fight against corruption in India. This was created by a non-profit organization also known as the 5th Pillar.

All the Notes have certain numbers written on it to distinguish itself from the other Notes. This numbering is done also to make all the Notes unique and with different numbers in it so that one can locate its origin from which RBI bank it is printed.

Three ways to keep a record of all the Currency issued till date, Money flowing in the Market, and Money destroyed:

A prefix: It is the letter that comes in front of the serial number it is what makes every Note Unique. Instead of 26 alphabets only 20 are used to do that, I, J, O, X, Y & Z are not used.

An Inset: There is a bolded letter in the background of the serial number. Its purpose is for internal identification.

20. What Can you do with Damaged Notes? 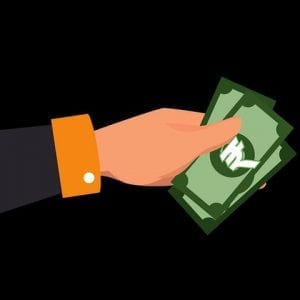 Soiled notes: A torn Note may it be in a single piece or completely apart can be easily exchanged for the full value of it from Reserve bank of India.

Mutilated note: A note that has a part of it missing. If the single largest piece is more than 80% in the area of the full note of that denomination, you get a full refund in exchange. If it is between 40% to 80%, you receive half the value of the actual amount.

Well now before putting the change coins in your wallet, you’ll definitely check the small mark to know it’s from Kolkata or Delhi. We thought you ought to know some facts about the very thing you work hard all day, all week. Well these were some invaluable facts, or were they? These are 20 Interesting facts about Indian Currency that have now made you more aware of each of your pennies cause we all know each and every penny counts! 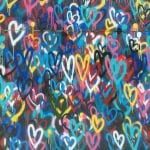 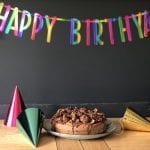