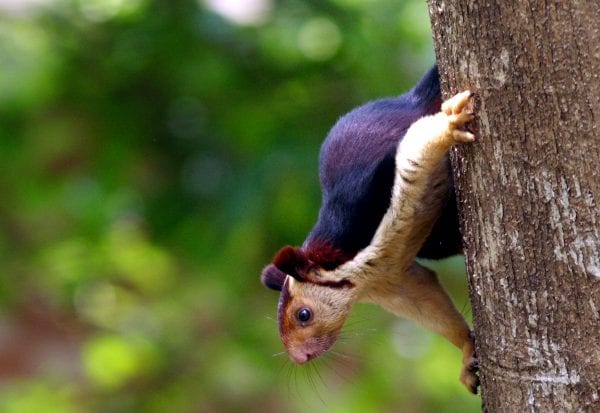 Did you hear about the Indian giant squirrels?

Imagine walking on a garden and passing a giant tree, you hear this sound and instantly your brain transports you to a childhood memory, where you listened to this voice, and looked around, only to find a squirrel.

Everyone has at least one childhood memory with squirrels those small squishy animals you must have seen them doing all kinds of mischievous activities like jumping from one branch to others. As a child, you must have stared at them for hours to see where do they collect those nuts and how they take it to their homes may it be a burrow or hollow nest they made in the trees with leaves.

You always thought you’d catch them, but they run so fast that they disappear in the blink of your eyes. I’m sure you must remember the creaking, almost annoying, sounds of the squirrel. So you give the squirrel a smile. A glance at that cute creature, almost as if you wanted to converse with him about your earlier meeting with his uncle maybe. Then you walk on. Indian Giant Squirrel in one of the unique kinds of squirrels that reside in India, and when we get to know more about it, we will realize Indian giant flying squirrels are God’s beautiful creation. 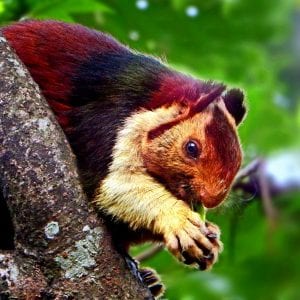 We have read so many stories and saw them in so many movies that writers have given us a perspective for them; we see them as cute little animals who work hard and are witty and friendly. Stories like “Gillu “by Mahadevi Verma made us think squirrels are friendly, and Charlie and the Chocolate factory tell us how despite being so small, they are so hard working.

Remember who the funniest character was in The Ice age, Yes a squirrel. Do you know squirrels are sacred creatures in India? They are worshipped because of their association with Lord Ram and the construction of the Ram Setu bridge. (We know that the image of a squirrel carrying a rock for the bridge sprung into your mind).

There are around 200 species of squirrel in the world, and India has one of the most colorful kinds of squirrel called the Rainbow squirrel. Many wildlife photographers and researchers have discovered Indian Giant Squirrels, also called Malabar squirrels; they are indeed God’s most beautiful creation.

Before everything else, this is all one needs to know about the biology of Indian Giant Squirrels. They belong to the Animalia Kingdom, Mammalia Class, Rodentia Order, Ratufa Genus, and their species is called Ratufa Indica. They are oriental (native) Indian species, and their local pet name is sheer, which is in the Marathi Language.

Want to know more about these beautiful creatures? Let’s find out. 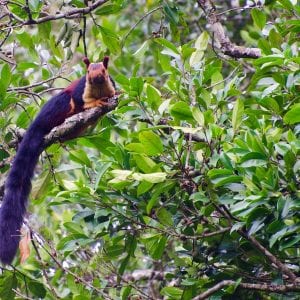 Wondering what’s an Indian giant squirrel size? These squirrels happen to have a significant dramatic physical appearance in comparison to other grey squirrels; their size can be nearly 25-50cm from head to complete body and the tail of almost the same length and weigh around 1.7-1.8 Kg.  Their ears are small and round. Their hair color has different colors like Black, Brown, Maroon, and Purple.

The uniqueness of having a multicolored physical appearance makes us question being an animal residing in Wild habitat how do they manage to camouflage themselves as they have vibrant showing off colors.

They have long tails to maintain their body weight and make sure they don’t fall off the trees when they take long leaps. They can jump up to 6m (20ft) when they feel alarmed or are in danger from their predators. Their body is well adjusted to arboreal location. Both male and female Malabar Squirrels look alike, except females have three mammaes.

These animals fall into the Omnivores category, and that makes it easy for them to find themselves food; they mostly eat nuts, fruits, insects, eggs, or leaves. Something different from other grey squirrels is that they don’t store their food underground instead, they like it to be better kept safe in treetops, guess they are very protective about their food as they make caches of their food. If one wants to know what is their favorite food, we can vote for Jackfruit.

Where are they found?

As the name suggests, they are found in the Malabar hills, which is geographically in Peninsular India. As they are not usually seen where humans exist, if someone needs to look at these beautiful creatures, they need to go inside the forest or rainforest biomes and sit almost in a treetop patiently and wait for them to show their flashy self. The environment that makes their living easier is Tropical and terrestrial habitat. They build their homes in tree holes and usually have more than one nest to take rest, and they live in small colonies. But for mating purposes, they have a specific nest. For residing, they choose tall branched trees so they can hide in the canopies.

There are four subspecies found according to Geographical variation:

How does a Malabar squirrel spend its day?

If we have to compare their behavior to how humans behave, then it can be said they have an introvert personality type; they like to be alone most of the time and resist contact with other animals or their kind for that matter.

They prefer to live with their mates during the mating period; otherwise, they seem to be very shy as they come only in early mornings or evenings and choose to take rest during mid-day, and this peculiar lifestyle makes it difficult to spot them.

Males are competitive and look for females to mate during the breeding seasons, and they seem to be relationship kind of species as they remain Connected for a long period. They have specific mating calls where they vocalize, and sometimes they are loud too. The Mating season for them begins in around October month and is till January. After Incubation of 21-25 days, a pup takes birth. A newborn can weigh up to 74.5 g at birth and can be 27.3 cm long. These newborns come out in the environment during March.

Lifespan of an Indian Giant Squirrel 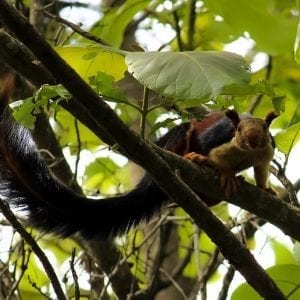 Indian Giant squirrel has a lifespan of 16 to 20 years on average. When they are newborns, they don’t possess fur or even have eyesight that’s the reason they stay in the nest for 30 days after being born and grow for the next six months. Only after two years, they become sexually active. Living in Wild Environment, their life expectancy is always at risk, but their overall built makes them survive better.

The Ecosystem Role of the Indian Flying Giant Squirrels

We are well aware of the life cycle and the co-existence of all the animals and humans to survive. This survival is only possible if there is a balance in our Ecosystem. Indian Giant Squirrels become part of the Ecosystem as when they eat fruits and jump around from one place to another, and when they defecate, they play a major role in the growth of plants.

In this life cycle, where one animal eats other, these squirrels become prey to Snakes, cats, raptors, and civet cats.

Are the Indian Giant Squirrels endangered?

Global Warming and Climate change have majorly affected animals in and around the world, and human insensitive behavior has created great havoc for wildlife. International Union for Conservation of Nature (IUCN) Red list says that Indian Giant Squirrels fall into the “Least Concern” category. There are six categories in IUCN, namely – Data insufficient, Least Concern, Near Threatened, Vulnerable, Endangered, and the worst affected category that is Critically Endangered.

According to categories according to the US Migratory Bird Act and US Federal list, this animal is given no special status. But there is no overall estimate of total numbers of Indian Giant squirrel and book written by Richard W. Thorington, Jr., John L. Koprowski, Michael A. Steele, and James F. Whatton –”Squirrels of the World” Ratufa Indica’s Population is in decreasing trend and is near threatened, the book says they may also be extinct.

Pune has taken the initiative for its Bhimshankar Wildlife Sanctuary and the number of squirrels in Maharashtra is around 1800-1900 and has hiked by 8% between 2015-16, according to Pune Mirror. It is important to protect the future of these animals, the beautiful Indian giant flying squirrels. 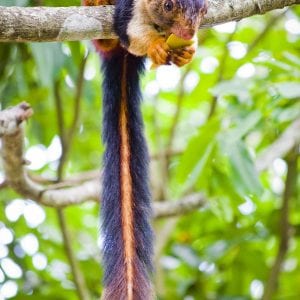 These not so small Indian giant squirrels are so unique and beautiful that they need to be protected as they make Environmentalists and photographers curios about their existence in itself. These Magnificent multicolored bushy animals deserve our attention. Other than being a subject for the photographers, these squirrels are an important part of the food and life cycles. It is a known fact that, without any one of the components, the balance is disturbed.

Also, the Malabar squirrel is something that India takes pride upon, just like the case with Australia & Kangaroos. Protecting them is linked with protecting the culture, pride, and the beauty of India. In a nutshell, these nutcrackers called Indian giant squirrels don’t just look beautiful – they are equally important. 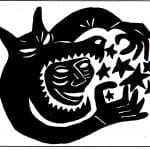