Freedom, the dictionary meaning says it’s the power or right to do as one wants, but let me tell you it’s way more than that. The true essence of freedom is a concept so alien that it always has been the topic of discussion among the philosophers and the wise. One can argue that it’s not true and people can generally do whatever they want so let’s see whether we can wield that much freedom.
Starting from the quantum level itself, an electron is said to be free to rotate the way it wants but having said that it can only do so in certain energy state and as soon as the state changes it’s forced to change its trajectory. Scaling up to cell division, theoretically cell division can continue infinite number of times, but inhibitors stop that process as soon as they reach a particular level otherwise it would become cancerous. Scaling up a little more; come humans. We devised laws and made constitution that protects our freedom, but the question you should be asking yourself is that “are you really free to do ANY thing you want”. The answer is a big NO.

We exercise freedom up to a certain level its acceptable, to go inside a person’s house and declaring it as yours; it’s a concept of Freedom but against the law. The famous lines “Man was born free, but everywhere he is seen in chains” said by a Rousseau supports the view of totality of freedom ,he said that people deserved to be free and make choices as they want but that they are chained by the societies in which they live in.
Scaling up even more to the level of planets and galaxies, you would be shocked to know that even they are not free, planets are affected by gravity and the galaxies by the attraction of one another. Even the cosmos that are said to be infinite and everlasting have to obey some external force at some point in their life. The idea of total freedom is revolutionizing as it gives an entity a power to do virtually anything.
The laws and custom made in our society that said that they protect the citizen’s right to freedom are the means to maintain law and order, which is in fact the civic thing to do as without the laws it would have been a complete anarchy. The drive for freedom is a strong one; it was so strong that it helped our country gain independence from the British rule. Man always aimed to be free as to when freedom is exercised the fruits of prosperity, innovations, culture, harmony, etc. can be reaped. But as soon one taste’s true freedom, anarchy follows, the shining example being Adolf Hitler.

One thing we always forget about freedom, a secret hidden in plain sight, a universal truth: Their exists a power that wields total freedom and can do virtually anything it wants many people among us call it by various names.

In English that power is called GOD.

Hey there, I am Harshit ; I love writing, blogging and doing business analysis, didn’t I tell you I am also an engineer , but hey who isn’t these days. 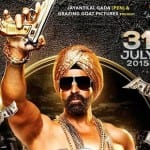