No. That’s not a question. It’s a training course. A training course that covers, I don’t know how many tips, and works everywhere. Almost everywhere. The course isn’t exclusively for guys because I’m sexist af and therefore, if someone needs to be demeaned, it needs to involve both the genders. So, here I am, teaching you, How to get away with poor flirting!

What are you waiting for now? Me? I’m not Christmas!

The possession of any one of the above three makes you nice. Any two of the three, makes you charming, and all of the three makes you irresistible. Now, everyone who somehow thinks that reading isn’t important, you’re mistaken. Any guy who reads is smart, and any woman who’s ever seen Sherlock knows that smart is the new sexy (Not death. No no.).

Add a never ever ever to that. Yes, the kind that is in the Taylor Swift song. I know that there is a why associated to that rule, so it’s pretty obvious that I give you the because. You don’t give clothes to a girl because then she’ll hate you because she won’t have matching accessories. So, you give her shoes, a lipstick, and a nail paint so that she runs off and buys the prettiest dress that pleases her (And you. Of course, you.)

That was a silly relationship advice, but when you’re talking and he chooses to smile and look down, he’s listening. He’s just too shy to admit that he finds you adorable because that’s what flirting is about in the first place.

Always do that. Even if the other party is way out of your league, check your breath and go say “Is your dad a terrorist? Because you are a bomb!” Actually, no. Say Hello. Like from the other side? Or rather the outside? Make them believe you’re smart for 15 mins, they’re going to figure out that you’re a fool one day or the other.

Rule number 7: The signing off note

The signing off note says that all the 6 rules are bullshit. Nothing can happen unless you want it to happen. The article was meant to be insulting and offensive in every way possible because there are no rules to flirt with a man and a woman. Well, there are but the only ones who go by them are the ones who’ve never had the courage to try anything else. It’s not being yourself, or having confidence, or having the right time, or the right person, it’s about liking a person at random and having a will. As long as you’re not creepy with it (I will write another article with about 50 ways in which you can be creepy), it’s fine.

So, don’t come after me. I’m not Christmas. And I’m not interested. 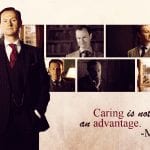