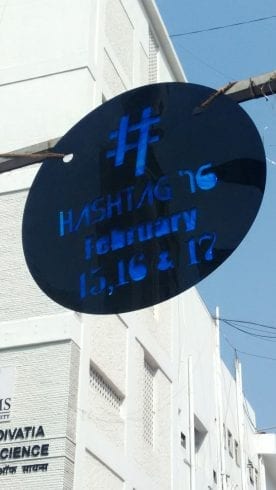 Mithibai College stood in all glory with a roof of blue pom-poms on the second day of Hashtag’16, the media festival for the Mithibai College and Harkisan Mehta Institute of Media Research and Analysis. We were invited to attend the event called, “Journalism of Courage” as a part of our collaboration with the fest. Seeing the work, and the organization of everyone present, it was hard to believe that this was just their first year.

The air in the seminar hall where “Journalism of Courage” was to be conducted had a sort of seriousness which the event demanded. Only five contestants were chosen to speak, after a tooth and nail sort of prelims, where they all had to submit a 350-word summary of their article in the first round. If selected, an expanded 1000-words version of the same was to be given, which in the end, had to be crowd pulling and therefore, had to get the most number of likes on our very own, “Facebook”. 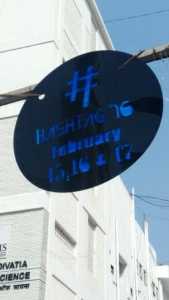 The excitement was, therefore, too much to take. The main event was judged by the veteran social and political writer and journalist, Dilip D’Souza. Most of the contestants (all women, by the way) were very keen on the big question, the state of the women in our country, and had a fresh new perspective on each side of the argument they had taken.

The first contestant came in with the most talked about issues of the times, the culture associated with rapes. The appropriation of the victim and the misogynist statements related to it. There was a particular kind of anger with which she spoke, which reflected in her words, her mannerisms, and it elevated her confidence just right to give every punch the good impact. She ended on a questioning note about why our country has one of the highest state crime rates in the world, especially against women and how this makes her question every man on the street.

The second contestant turned out to be an exact opposite of the first regarding her elocution. The confidence was, in no way, any lesser, but the attitude and the style of speaking were very casual, very calm. She made her speech sound like an everyday conversation and thus, remained engaging. She had one of the most impressive starts. It dealt with how women are Gods in our country, and then, very easily, swayed us into the real topic of her monologue, how we love deforming the very same women by throwing acid at them like its colors at the Holi festival. 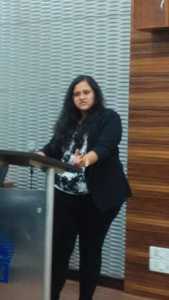 The variation in personalities didn’t just end here. The third one came with a very confident yet relaxed vibe. The firmness with which she spoke of her ideas made it seem like she was there to change the mindset of every person in the room. And why wouldn’t she? She was talking about the sexualization of women in the media. One of the best lines from her speech included things like, “If ‘sex sells’ is your argument to have bikini-clad women in men’s magazines, why don’t we have half naked men in ours? Why do even we have to watch the bikini-clad woman?”  and “You’re not just giving a false goal to your daughter to become a fair, beautiful woman, but you’re also giving your son the expectations that he could get a perfect woman, which is unattainable because she doesn’t exist!”

The rest of the two came in with distinctly a different image of the society. While the fourth one talked about our acceptance of the differently abled in our nation, the fifth spoke of the dark side of feminism. The former’s speech clearly stated her passion for the content and concern for the ones it was about while the latter’s went on to dismiss the stereotypical feminist vibe that always wants men to take all the blame. Both of them clearly pointed out our flaws in the teachings of what is good and what is bad which has made us not see the other side of the stories, and has thus, made us hypocrites.

After an hour full of fantastic speeches and varied ideas came in the judge Dilip D’Souza, who, unlike the other judges opted for constructive criticism rather than only appreciating the effort of the participants. In our personal chat with him about the event and the face of journalism and the society as a whole today, he said,

“The anger doesn’t take you very far in journalism, but it’s important that the fire is there. It keeps you going. The generation today has a lot of it, and a lot of opinions. I might not agree with all of them but it’s exquisite to hear about it. It’s important that they’re aware. In the end, journalism is all about getting your story across. There would always be people who’d think that it’s all about creating the hype, but the ones who do that aren’t respecting the art of it. And it’s crucial that you believe in what you sell, you do your research right. And that is why, as the recent events are turning out, I see a lot of hope, and creativity in young individuals. I’m glad that they, at least, have some ideas, even when I don’t agree with them.”

Fest In The City : Polaris!

The Success Story Of Souled Store – An Interview