Editors' Picks God Does Not Ask For Immigration 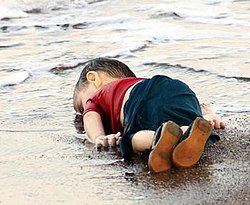 The world was created as one, by the Almighty and today, humanity has succeeded in dividing it. The Mediterranean sea, as it washed ashore 3 year old Alan Kuridi’s body, screamed out to question this fact and the whole of human race hanged its head in shame as it watched this innocent, vibrant life splayed face down at the shore, his unforeseeable future wasted.

Alan Kurdi and his family of four in their third attempt to escape the war-hit Syria and in a hope of finding a better future, had left for the Greek island of Kos but little did they know that this attempt would be their last one and one that would stand to haunt the father, Abdullah for the rest of his life.

Over centuries, people have demarcated lands and a plethora of lives have been claimed by politics, unmindful of the heavy causalities that have served as the price to these fits of covetousness. To the minds of the “Men of the World” these have been collateral damages but would one be able to shrug off this loss of life as easily, after exposing themselves to a deeper and possibly a more personal inspection of the loss of the life of this child while they tried to flee to Europe “illegally”.

Following this sad loss, a volley of criticism was largely directed at the Europe and their refusal to accept immigrants at large. The reasons for such vehement reactions or stands of the governments of these countries are without a doubt dictated by fear of economic, political and religious changes to say the least. One of Europe’s major worries is that the changes that large scale immigration can bring about to the voting bank of the same since a poll revealed that 67% of the people of Europe wanted the government to deploy armies to keep refugees out. On economic grounds, Europe claims that it is not strong enough to support mass immigration but this is hard to believe. Branko Milianovic in his blog rightly states that, “it might seem odd to an impartial observer that rich Europe of more than 1/2 billion people is unable to cope with one hundred thousand migrants and refugees while much poorer Turkey has accepted 1.7 million refugees from Syria” and the unwillingness of Europe to be of help renders a staggering blow to the human morale.

While Europe’s self-serving motives are being substantiated by different politicos, the underlying reason’s for Europe’s decisions will leave one aghast. From worldly, materialistic motives one now comes down to spiritual ones. While religion originated to unite and instill faith and hope in people, today that is the very reason for Europe’s reluctant attitude towards the refugees. While on one hand, xenophobia has been supposed as a leading factor for not wanting to accommodate the refugees, on the other hand, Europe is terrified by the impact the immigration might have on Europe culturally. With Islam rapidly buying up European churches, Europe is now afraid of the religious implications and how the culture of the Syrians who are different in every way, can affect the present norms and ways of living of the country they migrate too. While at a European Union summit that is to happen this week, leaders deliberate on how to go about the situation and manage the crisis effectively, the f 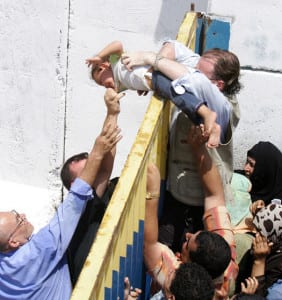 ate and the very lives of the refugees hang in balance.

Politicians and militants, on the other hand play the blame game and at the end of the day one realizes that no matter who the culprit in this succession of violent massacres is, it is always the innocent that pay the price. Thus the overwhelming pathos of the situation forces the world to take some time out of their busy, chaotic lives and focus their minds on the crisis at hand for a few moments. Is the demand of ISIS wanting to become a super power a reasonable one? Obviously not. But are they the only ones on whom we rest our hopes, thinking that someday they will desist or until our time comes we should live in ignorance?

In this world of social constructs where we draw the norms and define what is legal or illegal, can we term refugees who attempt to flee to other countries because they want to save their lives, “illegal”? As it is, lives of God knows how many more Alan Kurdis are at grave peril, do we need to jeopardize their lives even further by refusing to them the legal means of reaching and surviving in a different country?

God made humanity as a whole and humans have divided and constructed walls instead of mending bridges round the globe and while we tenaciously fight for “rights” and try to protect “our” people, we are losing sight of our priorities. A sense of belonging for one’s countrymen is commendable but the need of the hour is for strong countries to set aside petty differences and lend a helping hand to the ones in danger, as a whole. After all “immigration” wouldn’t be termed so if it wasn’t for our race who divided it in the first place. God does not want immigration, for God didn’t envision any of us as immigrants.

Oindrila is a student of Delhi University with a passion for Literature and her hobbies include music and dance. Apart from this, she is  also a voracious reader and hopes to establish a career as an editor some day. Meanwhile she finds joy in little things and strives to make an impact through her writings in order to touch whatever lives she can.