Emily Elizabeth Dickinson (December 10, 1830 – May 15, 1886), one of those finest poets who did not receive compliments and fame in their lifetime. Only 10 out of her 1800 poems were published in her lifetime. It was Lavinia, Dickinson’s younger sister, who found the secret box where she used to save her art, after Dickinson’s death. Emily Dickinson and her life remained an enigma cause she was not there to elaborate the metaphors that she designed in her poems. Her personal life, which causes so many griefs, will always be a mystery. Thomas H. Johnson published The Poems of Emily Dickinson in 1955, and the world became aware of Emily Dickinson, an artist herself.

1. Emily Dickinson: ‘Tell all the truth but tell it slant.’

This poem is an eight-line poem with the rhythm of the ballad of traditional churches.

The name of the poem itself is advice to every aspect of life since Dickinson did not give a specific truth; hence a more extensive number of readers can relate to it.

In the first four lines of the poem, the poet gave an authentic remark saying, human delight is ‘infirm’ or weak, and hence they should not be aware of the truth, which is often harsh, at once. Instead, Dickinson advises us to tell the truth in ‘circuit,’ one should never share the bitter truth at once, instead share it like a circuit, bit by bit.

In the last four lines, Emily Dickinson compares the truth for humans to ‘lightning’ for children, both must get acquainted with each other slowly and gradually, or else ‘every man be blind.’

This poem of Dickinson is one of her best works about mental health. In this poem, the word ‘funeral’ is not used as a memory of a real incident or an imaginary scene; it is taken as a metaphor to depict her mental breakdown.

In the last two stanzas, Dickinson used the process of burial to elaborate her mental state. She addresses the thickening of eternal solitude along with the unbearable mourning and the sound of drum beats. Till the approaching of the boots and box, everything was in her head, but now she will approach the external world. She addresses the bell as a sound from heaven, with that sound, she now knows nothing, and her head is void. The chime left no place for silence, just like the poet got isolated from the world of intellectual beings.

This poem of Emily Dickinson is lyrical. Dickinson never named this poem, so even though the publisher changed the first line still addresses the name of the poem ‘The May-Wine,’ the poem.

Dickinson used ‘drunkenness’ as a metaphor to celebrate the ecstasy that she receives from nature. This poem is so soothing that every reader can find it delightful despite getting the metaphor.

The poet is not drunk on alcohol; she is drunk, with nature, dew, and fresh air. She even addresses the drunken bees, who are drunk on nectar. The poet says, also, if the bees stop collecting nectar from nature, the poet will still get drunk in joy.

This poem is an excellent example of the fact that romance begins from nature. In the last stanza, Dickinson addresses the movement of the clouds by angels and the movement of saints towards the window to see that sight; they will still find the poet, enjoying the warmth of the sun, and all drunk in happiness.

In this poem, Emily Dickinson expresses her happiness and, most significantly, her longings. Here, the poet expresses her joy about the thoughts of nights that she will spend with her beloved, and she even imagines her lover and herself in Eden, in love.

The poet is passionate and strong about her love, she says, she doesn’t even need any map chart or navigating tool to reach her desired destination.

Alike, most of her poems, Dickinson did not mention the specific longing; it can be about her lover, dream, religion, and even death. 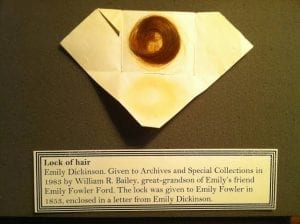 This is one of the most famous and delicate poems by Dickinson, where she portrays that she loves her privacy. Dickinson, as we all know, never used to go out of her house, she never stopped writing, and she used to spend her days writing and sending letters to her family and friends.

The poet starts this eight-line poem by saying she is nothing, and she questions her readers, ‘Are you-Nobody-Too?’ And she confirms to her readers that both of them are nobodies and asks them not to reveal their identities, the society will take, flashing their lives as a significant part of their job and advertise it. Thus, the poet and reader will lose the chance to stand out and be nobodies.

In the last stanza, there is a tone of sarcasm, she says to be somebody and live publically is dull, she compared that life to the life of a frog that goes on saying his name to the boggy ground where he resides.

6. Emily Dickinson: ‘Hope’ is the thing with feathers’

This poem of Emily Dickinson is inspired by her favorite Emily Brontë’s poem ‘Hope’. This poem radiates nothing but positivity.
The poet metaphorically uses the bird to depict the ecstasy of the human soul. This feathery creature keeps on singing without putting an end to it at any circumstance. This creature sings a song of ‘Hope’ endlessly.
In this very poem of Dickinson, we should keep the punctuation in mind. In the second stanza, the poet talks about the painful journey of the ‘Gale’ whose song gets sweeter with tough times. Because with pressure, as ‘storm’ in the poem, comes the ray of hope.
In the last stanza, Dickinson indicates herself with ‘I’, and she says that she has heard the singing bird in her tough times, but ‘Hope’ never asks for anything in return. 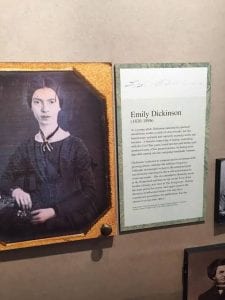 A part of the wall in Emily Dickinson’s museum, with the only authentic portrait of her.

In the first stanza, Dickinson says that she is observing a bird that just came down the walk. The bird is not aware of the presence of the poet, she is moving around in its own natural way, freely from human existence. The poet saw the bird, eating an ‘Angle Worm’, and the bird ate it raw.

In the second stanza, the poet saw that the bird is eating water in the form of dewdrops from the grass and that the bird is also very much aware of its world, he hoped on so that a beetle could pass.

In the third stanza, the poet elaborates on the actions of birds, the ‘rapid eyes’ and ‘frightened beads’ to show the awareness of the bird about the life risk. By the term ‘velvet’ the poet is either presenting the color of the feather or the kind of luxury that their kingdom has, in both ways, it shows that the poet is fond of the bird.

In the fourth stanza, the poet offers the bird ‘crumb,’ but as the bird’s instinct did not like the sudden intrusion of the poet in his personal space, he unrolled his feathers and flew away.

In the last stanza, Dickinson sees very fascinated with the feathers of the bird, and she metaphorically compares it with ‘oars divide the ocean’ and ‘leap, splashes as they swim.’

8. Emily Dickinson: ‘Because I could not stop for death.’

This poem is one of Dickinson’s most iconic poems; it is six stanza ballads.

In the other stanza, she compares life with the death carriage and says this is much superior to life as it shows some happy visions, a scene of a school where the children are playing, happily, a scene of ‘fields of gazing grain’ and then the setting of the sun.

Gradually, the poet feels cold; she says her clothes are not warm enough to make her survive. Then, she realizes they have stopped in front of a house that resides in the ground. After that, a century feels a mere day since she guessed the heads of the carriage horses were towards eternity. 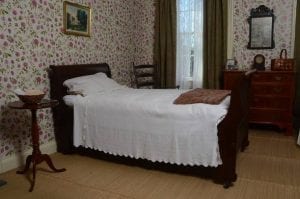 9.Emily Dickinson: ‘My life had stood – a loaded gun.’

This poem of Emily Dickinson depicts the power of sleep of a woman who is being used as a tool by a Master in the world of patriarchy.

In the first three stanzas, the poet is saying about the treatment that the woman is suffering from, in the world of her master, most likely to be her husband. She is being used as a tool to kill a female deer, and her voice is considered as insignificant. Gradually, the poet expresses the inner anger that the woman is feeling, and her vulnerability can turn to a volcano like ‘Vesuvius.’

‘Eider duck’ is a type of duck that tears its feathers to make a nest and feel comfortable.

In the last stanza, the woman wants her master to live longer than her, for she wants her words to stay immortal.

In the year 1884, Emily Dickinson was diagnosed by Bright’s disease, and she chose never to write anything again, she used to just sleep in bed all the time. In the winter of 1885, Emily Dickinson refused medical treatments and wrote her last poem, ‘So give me back to death,’ she died in the year 1886. The epitaph of her headstone says, ‘Called Black.’

‘So give me back to Death –

The death I never feared

Except that it deprived of thee-

And now, by life deprived,

In my own Grave I breathe

And estimate its size-

Its size is all that Hell can guess-

And all that heaven was-‘

This poem clearly shows that Dickinson is very much aware of her death. She always wrote about death, its kindness, its fondness, and now death is here, but she does not want to suffer the action of longing, she wants to die without suffering. 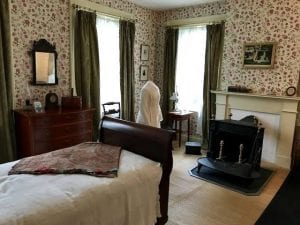 A view of Emily Dickinson’s room

Here are two movies that depicts Emily Dickinson and her personal life:

And a TV series of historical drama ‘Dickinson‘ played by Hailee Steinfield.