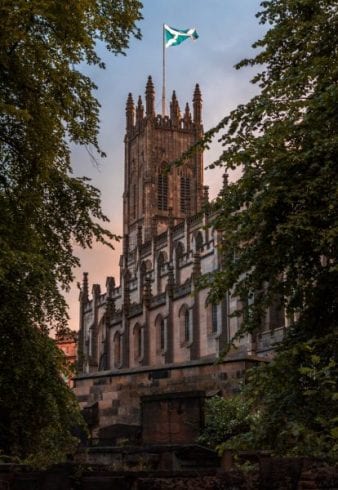 Are you curious to know about the spooky Edinburgh Castle and its historical achievements? Other than its eerie stories, the castle has a history enriched with bloodshed and sieges. The castle may be jinxed, but the stories revolving around it are unknown, and you might even be unaware of the riveting facts.

The castle, which was once the residence of the kings and monarchs of Scotland, now mainly acts as a tourist location. Tourists from all across the globe flock to Edinburgh to have a glimpse of this chateau. Sitting atop Castle Rock, the fortress contemplates the entire city of Scotland. 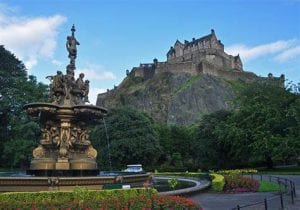 Back in 2019, the capital city of Edinburgh experienced a crowd of almost 1.7 million tourists.

Today, we will provide you with a detailed guide of the Edinburgh Castle- its history and facts too! Here is everything you need to know about the iconic pride of the city of Edinburgh, Scotland!

10 Amazing Facts of the Edinburgh Castle

1. The castle is situated on the top of a volcano.

The last volcanic explosion occurred nearly 350 million years ago! There is plenty of archaeological evidence that proved life existed there before the explosions too.

The last explosion led to the creation of Castle Rock. The architects constructed the castle back in the 12th century. I mean, how optimistic were they to build a fort atop a volcano and hope it never erupts? Jokes aside, it is a bedazzling state of the art creation and stands as a symbol of the England-Scotland rivalry.

We will talk about the rivalry and seizure of Edinburgh Castle later.

2. The Castle is the most beleaguered place in all of Scotland.

This castle has probably seen innumerable hostile forces and has been seized almost 23 times! This is one of the most embattled forts in all of Europe.

These were some of the notorious instances that occurred in the Edinburgh Castle.

3. The Castle has the oldest building in Scotland.

St. Margaret’s Chapel, which resides in the same site, is one of the oldest buildings that still stand firm in Scotland.

The castle was built throughout a long period, and many of its buildings have been brutally plundered during different wars or when the fort has been seized.

St. Margaret’s Chapel was built back in the 12th century. Margaret was the spouse of Malcolm III, who was well known for her sanctity and purity and died of a broken heart just three days after the untimely death of Malcolm in the battlegrounds.

This was one of the very few structures that were left unaltered when Robert the Bruce seized and plundered the royal palace back in 1314.

4. The mystery of Scottish Crown Jewels.

The crown jewels are also known as the “Honours of Scotland”. The Crown, the Sceptre, and Sword of State make up of the Honours of Scotland. All these were used in the old days to coronate the new princes and kings.

There were a lot of other British regalias, but this pair was the only one that escaped from the hands of Oliver Cromwell. He eradicated the others. 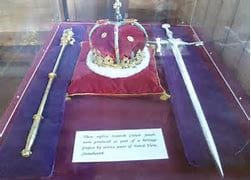 Later after the Union of 1707, both England and Scotland were united under the same crown. The Honours of Scotland were kept in a safe, well hidden in the Edinburgh Castle after that.

This fact was completely obliterated from the minds of people. Almost a century later, in the 18th century, Sir Walter Scott unearthed the Honours. And they were brought back to light again for the ordinary folks to see.

During the World War, these were concealed again, for there was trepidation that these treasures might get into the hands of the Germans. Now, there is an arrangement for a public exhibit of these crown jewels of Scotland.

5. The Castle has a sinister presence.

This would help the experts to mark and pin down where the subterranean passages led. The piper drifted away from his course and strayed away from the passages. 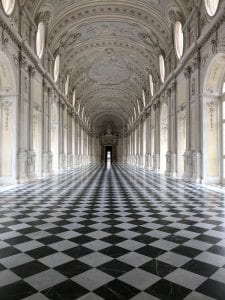 No one ever heard from him again. Even to this day, there is a certain uncanny feeling when one goes down to the dungeons, and one can listen to the eerie, ghostly tunes of the pipe at nights.

There are more poignant stories of Edinburgh castle, but we will get to those later.

6. The old gun of Edinburgh castle

During the reign of Scottish monarchs, there were no iPhones, or Rolex watches found.

When ships crossed the Firth Of Forth, navigators and sailors looked forward to the Edinburgh Castle for the time. It was the duty of the castle to reveal the time by shooting for an 18- pound gun.

Navigators adjusted their chronometers and went on in their journey. This old wives’ tale is now a tradition that is still followed by the people of the castle.

7. The Castle acted as a residence to an elephant.

The 78th Highlanders came back to Edinburgh Castle from Sri Lanka. They had brought about an elephant along with them.

Being one of the major infantry barracks, the elephant lived with the comrades. The elephant was an ardent fan of beer and used to visit the canteen of the castle for a pint. You can find more of his signs in the National War Museum of Scotland.

King Jame IV of Scotland was a bit paranoid about people going behind his back. He ruled during the 16th century and ordered for drilling holes in the wall to eavesdrop his courtesans. These were called ‘laird’s lugs,’ meaning ears of the king. 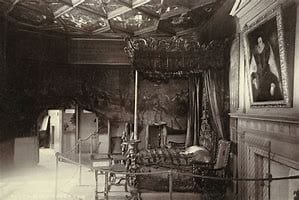 Later, when Soviet President Mikhail Gorbachev’s visit to Edinburgh, KGB ordered all the holes to be cemented and bricked. One is never too old for espionage.

Apart from holding 21 Pirates of the Caribbean, the Edinburgh Castle has also imprisoned several Americans during the War of Independence. The defiant carving of the American Flag in the dungeons of Edinburgh Fort remains as evidence of the fact.

The canine companions of the battalions of Scotland hold a reserved and unique place in the fortress. The mascot of the Black Watch 42nd Highlanders, Jess, and Dobbler, who accompanied Argyll and Sutherland Highlanders in their ventures throughout China, Sri Lanka, and South Africa- hold memorable places.

Their loyalty and compassion are noteworthy and have been given immense respect here by burying them right beside the soldiers who gave away their lives in the battles of Scotland.

The entrance to the cemetery grounds is respected but is visible from the Argyll battery above. 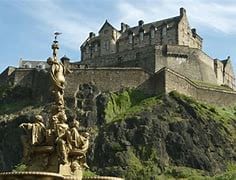 Though the facts are bewitching, the history of Edinburgh is bound to keep you engrossed in thoughts for the rest of your day!

Votadini, a Celtic tribe, was probably the first resident of Castle Rock. The first Scottish King that made Castle Rock his home was King Malcolm III Canmore. He resided there with his lovely partner Queen Margaret. After her untimely death, she was consecrated as St. Margaret and later beautified into Margaret’s Chapel.

English invaders captured the castle twice from 1296 to 1341. Both of the times, the Scots took it back by force. To commemorate King David II, David’s Tower was constructed. But this tower was plundered during a seize some 200 years later.

Mons Meg, who is a gigantic cannon, was established in the Edinburgh Castle in 1457 and is still present for public display. Though most of the castle is in ruins, one of the significant surviving structures is the Great Hall, which was finished by James IV in the 16th century.

The Queen gave birth to James VI, the future king of England, in the Royal Palace. After the siege that continued from 1571-1573 as mentioned above, the Edinburgh had to strengthen its defenses. For this reason, the Half Moon Battery and the Portcullis Gate were constructed. Charles I was the last monarch to have reigned over Edinburgh Castle.

There were several repeated encounters throughout the 17th and 18th centuries. Covenanters captured the castle twice during the Bishop Wars of 1639-1640. During the English Civil Wars, the new army of Oliver Cromwell attacked the court too. Jacobite rebels also kept on attempting to take down the castle, but they were not so successful. 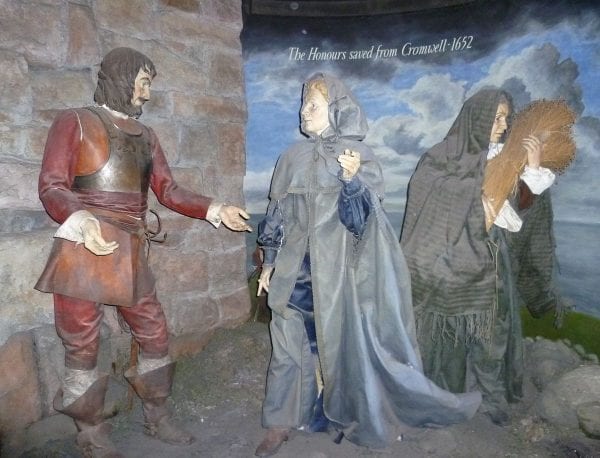 From 1757 to 1814, the Castle housed a lot of prisoners of the war. The three significant conflicts of this time were the American Revolution, the 7 Years’ War, and the Napoleonic Wars.

The Scottish National War Memorial and the National War Museum, now located in the Edinburgh Castle, attracts a lot of visitors all year round and provides you with a lot of knowledge regarding the different monarchs and seizes faced by the fortress.

It was declared a UNESCO World Heritage Site in 1995.

Try to book the tickets online in advance to avoid the crowd at the spot and save money too. The guides, as well as audio guides that are available at the ticket counter, will explain to you the entire history in detail.

Treasures of the Edinburgh Castle

Apart from being the repository of the crown jewels of Scotland, the Edinburgh Castle holds many more ancient valuable things.

Of these, the Stone of Destiny ( Stone of Scone ) is a symbol of the ancient Scottish history and relic. This stone was robbed and taken to England. 700 years later, in 1996, it was returned to its rightful owners- Scotland. Scottish Monarchs were coronated upon the Stone of Destiny, which is made of sandstone.

The Edinburgh Castle Esplanade, which is situated outside the drawbridge, is home to many concerts and festivals throughout summer. Royal Edinburgh Military Tattoo is one of the most famous music festivals that take place over there.

There is a permanent arrangement of seating outside the castle in case of any such functions or programs. Apart from this, every day at exactly 1 pm, the cannons are fired loudly. The One O’Clock Gun is the name of this enchanting tradition and has been taking place regularly since 1861.

It was first done to make the sailors aware of what time it was. Sailors adjusted their chronometers after hearing the firing of the One O’Clock Gun.

The Ghosts of Edinburgh Castle

The gruesome past of the fort makes it popular and the folklores revolving around it are way too interesting.

The Castle staff have reported a lot of shadowy figures, noises, movements of unknown people. They have also commented that they get a spine-tingling sensation during the evening and often feel the temperature drop down unnaturally. 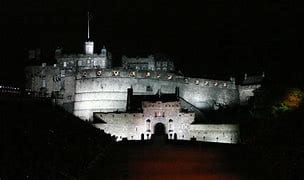 We talked about the lone piper before. But there have been a few other reports from staff as well as tourists too.

The Dung prisoner is the most known one. Prisoners were kept in the dungeons of the castle where they were beaten and killed mercilessly, and we can only say its those repressed spirits are roaming around now.

One ancient tale is of the headless drummer boy. Legend has it that his spirit is only seen when danger is about to occur in the castle. Before Oliver Cromwell’s siege, the boy was seen!

Other than these, there are many stories of witchcraft engaged with the castle, which makes this one of the iconic haunted places of the world.

Have you walked within the castle gates and heard the guides gush about the terrible British-Scot relations? If not, what are you even waiting for? Please pay a visit to the Castle on your next trip to Scotland and let us know your experiences. 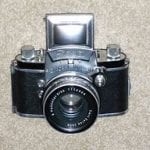 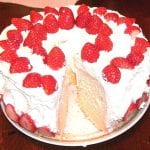