We live in a country where, for some unfathomable reason, having a girl child is considered to be a crime. No matter how much we choose to believe that this is a thing of the past, it’s not. However, times are definitely changing. People in our country are becoming more open-minded and rational, although at a slow rate. There are some people, though, who are helping speed up this otherwise slow process. One such person is Doctor Ganesh Rakh. He, to prevent female infanticide is making sure that the delivery of all girl children at his hospital is free of cost.

This wonderful initiative was taken three years ago and has already saved 432 lives of girl children. Doctor Rakh is the head of the Medicare Hospital Foundation Trust hospital in Pune. The hospital not only delivers girl children for free but also celebrates the birth of every girl child. They do so by distributing sweets in the entire hospital.

When Doctor Rakh, who is a well-known personality in Pune, was asked about the reason behind this initiative he said:

“Female infanticide is rampant because regressive social norms are not only anti-women but are even anti-girl children. As a medical professional, I have seen the torture that a mother undergoes when she comes to know that she has delivered a girl.”

Since it’s inauguration in 2012, this initiative has been taken up by many gram panchayats and many other doctors. Speaking about this, Doctor Rakh says: 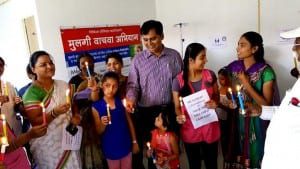 “After reading media reports about my work, I was contacted by nearly 17-18 gram panchayats and hundreds of doctors who have promised to welcome girl children by motivating families.”

Doctors across the country have also started this initiative in their hospitals. Doctor Pravin Dungarvar, who is the head of Anand Hospital at Kunjirwadi in Haveli taluka, has said that:

“Though it is not possible for me to completely waive off the charges, I saw his work and decided to do my bit too. Hence, since the last few weeks, I have started charging half the amount of a normal bill if a girl child is born at the hospital.”

Talking about how over 3000 doctors in Maharashtra have taken up his initiative, Doctor Rakh says:

“It’s not just me who has witnessed how relatives thronging the hospital on D-day hug each other when a boy is born and disappear when a girl is born. Even other doctors see it every day in maternity wards of hospitals. The tension on the pregnant woman for nine months is so severe and acute that you can actually see it in the fluctuations of her haemoglobin and blood pressure. After the word trickled out, my batch-mates and doctors working in districts like Beed, Ahmednagar, Solapur and other interiors wrote to me and said that they will stop carrying out procedures like indiscriminate sex-determination tests or unwarranted medical termination of pregnancy.” 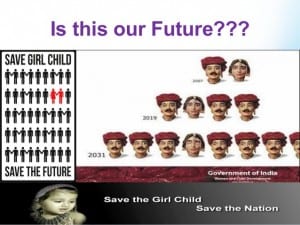 We hope that this initiative spreads all across the country and helps in changing the mindset of many Indians. People end up killing girl children because they believe that the girl child will not be able to earn for or provide for the family. If you continue telling a woman that her only aim in life is to take care of her family and ‘stay in the kitchen’, then you have no idea how she would do in the working world.