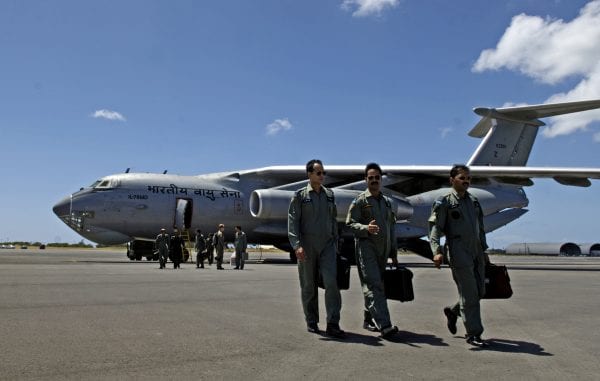 Indian air force pilots walk away from their IL-76 medium cargo jet after landing at Hickam Air Force Base, Hawaii, Sept. 20. The Indian crew flew Airmen from the 15th Airlift Wing on a training mission to show the capabilities of their aircraft to their American counterparts. (U.S. Air Force photo/Tech. Sgt. Shane A. Cuomo)

If you are reading this, either you are a defence lover or just a curious reader, well that does not matter but your time does and I’m pretty sure that you will gain some knowledge about our defence forces after going

through this article and no, you won’t get bored.

The Indian Defence Forces can be categorized into Indian Armed Forces, Paramilitary Organizations and Central Armed Police Forces apart from usual police service(not covered here). The Indian Armed Forces have 3 professional uniformed services under its domain, namely Indian Army (3rd largest in the World..right), Indian Navy (arguably 7th largest and among a few blue water navies…among what? read further to know more) and Indian Air-force (one of the largest and strongest in the world..#swag). The Paramilitary Organizations support the Indian Armed Forces and they are namely Assam Rifles (very old and strong..seriously), Indian Coast Guard (sister of Navy..almost literally) and Special Frontier Force (or call it Establishment 22..whatever suits you..Oh! also, it is under direct supervision of RAW.. and not the WWE one obviously) . All these forces are governed by Defence Ministry led by union cabinet minister of defence.

The Central Armed Police Forces are however, governed by ministry of Home Affairs and they consist of various forces too like, Central Reserve Police Force (CRPF) (largest among all central armed police forces), Border Security Force (BSF) (also called First Wall of Defence, largest border guiding force, see Wagah Border ceremony), Sahastra Seema Bal (for Nepal and Bhutan borders), Indo-Tabatian Border Police (ITBP) (as the name suggests) and Central Industrial Police Force (CISF) (personnel who guard the airports, PSUs and various other industries). There are other forces too (too much forces? well, we are almost done) like National Security Guard (NSG) (yes, we saw them on 26/11), Special Protection Group (SPG) (those safari suit people with black glasses around the Prime Minister.. yes!) and Railway Protection Force (RPF) (well..lets move on).

After that ‘brief’ introduction i would like to shed some light on some of the points that I mentioned like blue water navy; as much simple and obvious it may sound, it is equally interesting to know that three terms are used to define the navies all around the world. They are – Brown Water Navy, Green Water Navy and Blue Water Navy.

oing into further details, A blue water navy is in theory, a maritime force capable of operating in the deep waters of the open oceans with capability of prolonged and sustained operations in open waters. phew! Apart from that, for those who don`t know what is RAW (even after the excessive use of its name in Bollywood in recent times..) it stands for Research and Analysis Wing, being the external intelligence agency of the country.

Furthermore, lets talk about some of the various other Special Forces that make us stand out (really out).

Para (Special Forces): The largest of all special forces and probably most important of them all. Being a part of Indian Army, these are some serious bad ass units capable of going behind enemy lines and executing a surprise attack to break the bone of enemy.

MARCOS : Stands for Marine Commandos, an elite special operations unit of Indian Navy, they are it. Be it any condition, mission, terrain or enemy, if you think no one can do it, they most probably already have. They are most advanced and specialized force and among the few units of the world with capability of jumping in water with full combat load. They surpass para regiments with this ability along with the capability to perform maritime operations. They also helped during the 2008 Mumbai Attacks.

Garud Commando Force: The special unit of Indian Air force. They were formed in 2004 and take their name from a bird like creature from Hindu Mythology.

This is not an exhaustive list as almost every force and unit has its own special commando unit used for special operations but above mentioned are definitely among the best.

With that, we have come to an end of this ‘guide’. I hope you liked it, enjoyed it and more importantly got to know something.

Salute to the Heroes.

Hello there!
I am someone who likes to read, write, analyse and find humor in the life. I also hold interest in music and psychology! but then you know..who am i!