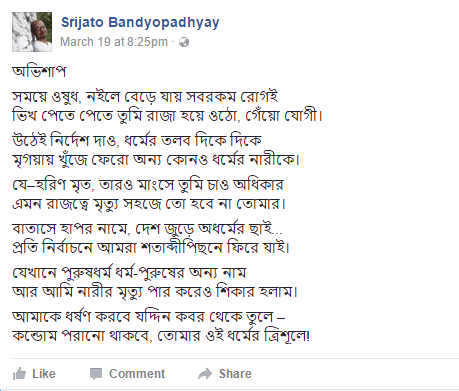 Renowned Bengali poet, Srijato Bandyopadhyay, got embroiled in a huge controversy regarding a particular he that he posted called ‘Obhishaap.’ This particular post was made on the 19th of March, just after the UP elections concluded with the election of Yogi Adityanath as Chief Minister of the state.

It is written in Bengali, the crux of it being a subtle attack on the election results and the rigid Hindutva mentality. Maybe it was constructed purely from a political perspective, but it, especially the last line, was regarded by some as an attack on Hinduism itself. The poem is narrated by a woman, and in the last two lines she says that as long as she would be dug up from the grave and raped, the trident of religion should wear condoms.

As the objections started pouring in, Arnab Sarkar, a college student from Bagdogra lodged a FIR at Siliguri Cyber Police Station for offending Hindu sentiments. Sarkar, a member of an organisation called Hindu Samhati, refused to let Srijato get away with this gross violation. Srijato responded to the FIR saying,

“It is really sad that in a country like India, which has been known for his democratic values, the right to freedom of speech and expression is shrinking fast. The majority of people in this country believe in freedom of speech…Since the poem was posted, I was trolled on Facebook and some of the comments made are very dangerous and threatening in nature.”

Sarkar replied in kind that his rebellion was also a part of his fundamental rights. He elaborated,

“In the land of Tagore and Saratchandra, his (Srijato’s) choice of words is distasteful. He is a pervert.”

The entire incident received mixed reviews from the masses.

Some believed that Srijato indeed had done wrong, and written it based on misinformation and the political atmosphere of Bengal. Apart from the ‘condom comment being out of line, they also felt that Srijato had judged Yogi Adityanath too harshly.

On the other hand, some felt that Srijato’s arrest would be a gross violation of his freedom of speech.

Support poured in for him from the Bengali community and even the chief minister of West Bengal pledged to be with him through this ordeal. She said: “I can tell you nothing harsh will happen to Srijato. Everyone has democratic rights. He wrote a poem, which is a political poem. Those who are spreading saffronisation have lodged the complaint.”

The police also received complaint from a certain Joyjit Bhattacharya who also took to social media to express his grievances.

The Siliguri police station had charged Srijato with a non-bailable offence under Section 295A (deliberate or malicious acts intended to outrage religious feelings of any class by insulting its religion or religious beliefs) of Indian Penal Code (IPC).

Taslima Nasreen stirred the storm again when she called Srijato out for being a hypocrite. Tapan Ghosh, the leader of Hindu Samahati took this opportunity to make his own sentiments known.

In recent developments poetess Mandakranta Sen, who supported Srijato throughout, has been targeted on social media.

Whatever Srijato’s intentions might have been, it is a shame that a poet still has to go through so much trial for writing his mind. Are our egos really so fragile?