News Indian News Commercial Surrogacy – A Right or a Burden?

The NDA Government’s decision to ban foreign couples’ access to legal surrogacy services in India has sparked a debate within the country about the practice of surrogacy itself – and the ethics required therein.

There is something of paternalistic condescension in the Government’s assumption that it can ‘protect’ adult, consenting women from the evils of reproductive exploitation by banning wholesale an industry which had proven to be the pathway to a better life for many of them.

This is not to say that exploitation does not, or could not exist in the surrogacy industry. Certainly it can, and most probably does, as in any industry where there is such a vast gap in power between the service-providers and the clientele.

But for the Government to assume that it can stop commercial surrogacy just by banning it in a book of law is like trying to stop prostitution by making it illegal. It isn’t gonna stop. Where there is demand (and cheap surrogacy is one of the fastest growing markets in developing world countries), there will always be supply.

If anything, by driving the industry underground through legal prohibitions, the Government is only putting the women involved in commercial surrogacy in greater danger – as now there will be no law protecting them from exploitation by clinics or clients, and no legal recourse when they do face such exploitation. For trying to earn a better living to provide for themselves and their families, these already helpless women shall be branded criminals and fugitives from the law. In what universe is that fair? 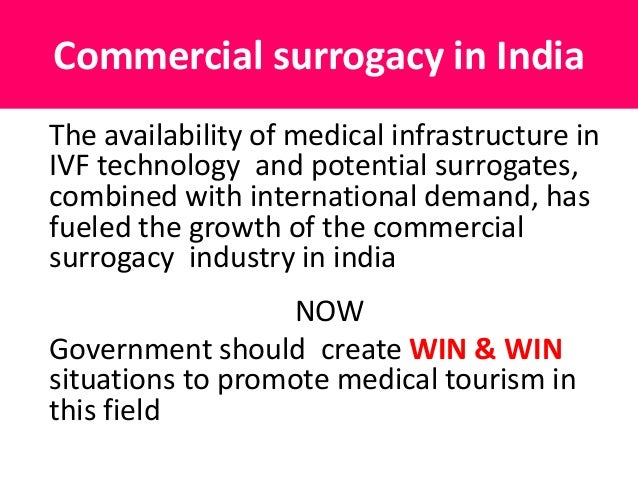 I will admit that I am not altogether comfortable with the idea of a woman giving her womb ‘on rent’ for a few months to complete strangers. But then again, I’m writing this on my laptop sitting in an air-conditioned room. As such, I can afford the middle-class queasiness with unorthodox sexual and reproductive practices – a luxury the women actually offering surrogacy services do not have. Mostly, these are very poor women, fighting to put two square meals on the table for their kids. And if commercial surrogacy can provide them with a ladder out of the mire of poverty and deprivation, should the abstract discomfort of the people sitting in AC rooms really be allowed to stand in the way?

By conflating the scientific and commercial issues of surrogacy with pseudo-moralistic issues such as marriage and infertility, the Government is putting a massive spanner in its own works towards ‘sabka saath, sabka vikas’. Vikas can only come with the economic prosperity of the lowest strata of society. Only then shall the basic necessities such as education and healthcare reach all citizens of India, converting it into a developed nation.

For this, the Government needs to ensure that well thought-out and well implemented laws govern the surrogacy industry; indeed, all industries of the country. Banning things does not stop them from happening, it just pushes them into the black-market, rife with exploitation and suffering. Why should the Government get to decide whether the biological parents of a surrogate child are married or single, fertile or otherwise? The only thing it should be concerned about is their ability and desire to give the child a good life. The Government should take off its rose-tinted glasses of outdated morality and ground itself in the realities of the modern world.