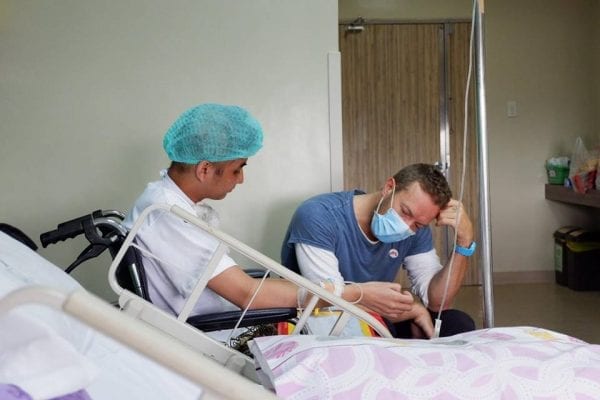 Chris Martin, the man who can woo you with his voice and charisma, also has a heart of gold. One can guess from his lyrics and songs that he is not afraid of his emotions and ready to face them head along, but it takes a special something to be a caring individual. Recently he visited a stage 4 cancer patient, Ken Santiago, in Manila, Philippines.

Ken, a medical student at the University of Philippines and an ardent Coldplay fan, had wanted to attend the concert and had taken pains to collect tickets. However, due to his health, he knew he would not be able to. That is when his older brother, Kheil Santiago took matters into his own hands. He appealed to the social media to help him out and wrote an open letter:

“A week ago, he already turned over his Platinum ticket to my younger brother. He does not show he is sad, he said it’s okay. But we can feel that he really wanted to be there. But due to his health condition that we cannot compromise….I am sending you this open letter to ask a little favor if the band could just say ‘hi’ or a short message for him to make him feel better.”

As is the power of Facebook, this post went viral and reached people across the global who were moved by this touching letter. The miracle happened when it was noticed by Rhizza Pascua, the head of Music Management International. Coincidentally he also happened to be the organizer of the Coldplay concert in Manila, and he then helped organize Chris’s visit. 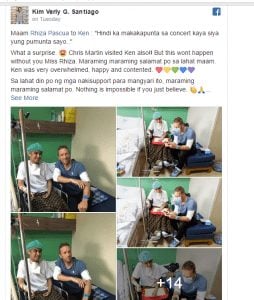 On his way to the concert, Chris dropped by to meet Ken and spent some time with him. Ken, overwhelmed but unable to speak because of his condition, conveyed his emotions to Chris by writing it on a white board – “I can’t thank you enough.”

Chris also asked Ken what particular song he would like to hear from Coldplay that night. When Ken responded with ‘Ink’, Martin immediately notified his band members to start practising. Before his departure, Chris gifted Ken some merchandise and a copy of their latest album.

Nobody wasted any time to applaud Chris for his gesture and wish the best for Ken. It is really heartwarming to see that being the superstar that he is, he is still grounded and humane. And it continued.

If this story is not a tearjerker, I do not know what is. It happens once in a while that something happens that arouses the same emotion universally- and Chris now has the good-will of millions. And to talk about Ken, I am sure people across the world are praying for him. When something like this happens, that is when you realise where the true power of social media platforms lies. This power combined with human will can make miracles happen. 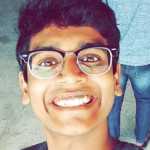 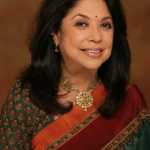