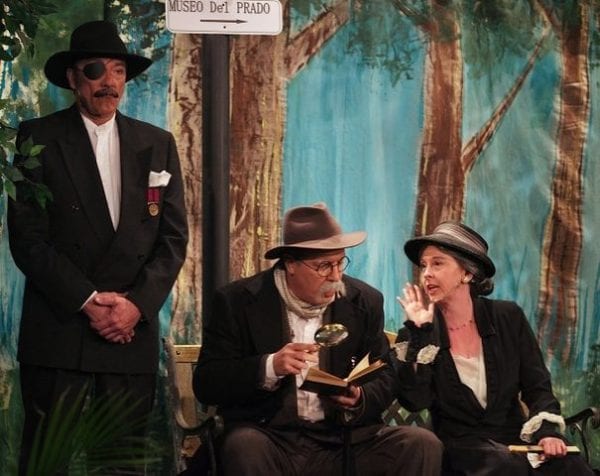 Sunny Morning: A Comedy of Madrid is a comic play written by Serafin and Joaquin Alveraz Quintero, known as the ‘Golden Boys of Madrid Theatre’.It is a one-act play with a tone of humour echoing all over the play.The major purpose of the play is to entertain the audience.The play revolves around two protagonists Don Gonzalo and Dona Laura, who in their youth were passionate lovers but torn apart by the cruelty of fate.They do not recognize each other when they meet in a park in Madrid on a sunny morning, after several years.But as they begin to talk, they realize that they are the characters of original love tale.But here both of them are unwilling to disclose their real identity.However, whole play can be viewed as a satire or a mockery over those who pretend to be true Romeo and Juliet.It leaves a message that nothing is stable and people are not ready to reveal bitter truths.

Play occurs in the setting of a park, where Laura feeds the birds.The whole play gives the audience a happy mood. The character of Petra who is Laura’s maid and Juanito who is Gonzalo’s servant are just timid characters in the play.The whole story is between Laura and Gonzalo.Arguments between Laura and Gonzalo are typical humour.From their arguments, we can draw a contrast between their characters.Laura is a calm lady who loves to be in the company of birds and nature.On the other hand, Gonzalo is tended toward the birds off.He even curses the priests for being occupied on his bench.He finds negative aspect in whatever he is surrounded by and goes on complaining.Laura gives grievances only when she is irritated by others.

Laura: You’ve scared away the birds who were feeding on my crumbs.

Gonzalo: What do I care about the birds?

Laura: But I do

Gonzalo: This is a public park

Laura:  Then why do you complain that the priests have taken your bench?

The whole conversation is informal.It is many casual and simple lines.The play is intended to be understood by all sorts of audience that is it is not esoteric.Inside the play, both protagonists narrate their old romance.It is through that narration, the audience gets the clue that these people knew each other long before.Authors have used the popular dramatic technique ‘ASIDE’ throughout the play- a stage device in which a character expresses to the audience his or her thought or intention in a short speech which, by convention is inaudible to the other characters on the stage.It is through these aside, the audience comes to know the truth these protagonists were the real lovers and their narration of death of old lovers were a fake one.

Laura:(aside) I will not tell him that I married two years later.

Gonzalo(aside): In three months, I ran off to Paris with a ballet dancer

During the narration of their romantic tale, it evokes pathos in the audience when we are convinced by their fake story of death.Later we realize that it was all fake through asides.The play also employs allusion-a casual reference to an another piece of literature, person or event.Here Gonzalo speaks about Spanish writers-Esproneda, Zorrilla and Becker  Gonzalo:’All love is sad but sad as it is the best thing that we know’ This is from Campoamor.

Author has used the writing technique of Local colour-the detailed representation in prose fiction of the setting, dialect, customs,dress and ways of thinking and feeling which are distinctive of a particular region.Here protagonists address each other as ‘senior’, showing respect in Spain.All the more, background is a park and a beautiful sunny morning which depicts romance, a parameter which we usually attribute to Spain and Paris.

Sentences used in conversations are all assertive and at times it becomes arguments.They are mostly loose sentences, they have the main ideas in one sentence and near the beginning.Most sentences are written in this way.The play ends with rhetorical questions- a question asked in a piece of prose or speech written when no answer is expected.It slows the pace of reading and draws the reader closer to the narrator’s perspective.

Laura:’Can it be that this is he?’

Overall the play evoked humour and maintains a happy mood throughout the complete conversations.It serves as a slapstick to those who pretends to be the epitome of true love.It also has a concealed message that things are not real as it appears to be.We are not ready to reveal the bitter and grotesque truth if we feel that it’ll ruin our image.

Hi folks
I'm doing ma graduation in english literature.I belong to kerala basically.
Writing has been my passion since my childhood.There are certain things which can't be orally communicated.But such expressions n emotions can be penned out.I believe writers can change the world

"pen is mightier than the sword"