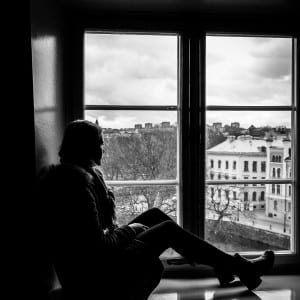 I have never lived in the same place for more than three years ever since I was fifteen. When I left the house I grew up in, I was not really upset. I was rather delighted by the idea of living in a new house, with a whole new bunch of neighbours!

After finishing my high school, I was sent to Delhi for my graduation as a reward for my “revolting act”. Like every other teenager, I was in love and wanted to question the world as to why I couldn’t love someone who went to a church or mosque unlike me.

I cried when I left and promised him that I would come back soon to meet him. Well, things changed. Not that I was in love with him anymore, but I loved shedding tears for him. Very soon I ran out of tears and excuses for being with him.

Soon after this, I found myself enjoying the attention and company of my flatterers. I wouldn’t deny that I tried to find peace in them and forget about the one I loved. Yes, I loved another man. But he left me even before I could know that I loved him.

Instigated by my revolting nature, I decided to give up my career as a lawyer and become a chef. My father, as expected refused to pay for a course that would help me end up with such a disrespectful job.

My sister paid for my culinary course in Paris. I used to call her quite a few times a month after going there, but then the international calls became expensive and cumbersome. And then, the few times a month changed to maybe once or twice a year.

The last time I heard of her, she was somewhere far off in the East living with her husband and daughter. Or was it a boy? I don’t remember. I wonder what she looks like now. Maybe she looks like my mother as she did in her youth. I don’t know.

My father never talked to me again, for I had disgraced him by opting for something he didn’t approve of being respectful. My mother wanted me to go home. So I did, for my father’s funeral. She looked very old. She wanted me to stay and shed tears for her loss. I wish I could, but the ticket to Australia was too expensive and I couldn’t afford to cancel the trip.

I promised to come back soon, but she knew I wouldn’t. So she accepted my negligence with silence.

Like every other girl, I dreamt of my perfect man. The only difference was that I didn’t dream to live my life with him. After I went to London, he called a few times asking me to come back, but I had dreams to live!

I didn’t feel sad when I left one place and moved to another. The new places were more homely than anywhere else. I kind of loved the bohemian in me. Every time I left a city, I promised it my revisitation only to fail in doing so. Unlike the men I left behind, I don’t think the city thinks much of my betrayal.

I used to work for seven months a year and travelled to different places for the rest of the year. Waking up in a new bed, in a new room, in a new city gave me utmost pleasure. Occasionally, I would wake up beside a handsome man who could make a nice and caring husband. But I had no time. I had my dreams to chase, places to see and many more men to wake up beside.

This afternoon as I sit here in my apartment in Verona with the gentle breeze kissing my hair away, I don’t exactly pine for love. But I don’t think I would mind the company of the men from my past, my mother, my father or my sister. I guess it would be nice to tell them that I love them.